You are here
Home > School News > HSE “We The People Team” Wins 1st Place in NYS: Team Heads to Washington D.C. for Nationals 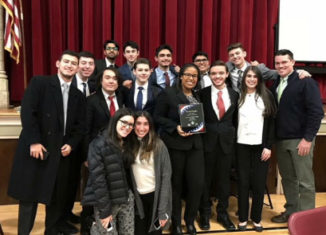 Each year, a little-known club takes shape at High School East – the “We The People” team of selected AP Government students with a desire to explore the US Constitution through competition. Last fall was no different, and 14 students, all seniors, undertook a journey to compete against their peers across the state. Preparation meant both learning the rules and the art of doing well in the competition, as well as making time to do the additional work required to research and prepare the written components individually as well as in our teams.

Many of us had older siblings who had competed, many of them winning or placing second at the state competition, and all of them with tall tales about a week in Washington, D.C. Unsure of how it would go for our team, most of us were prepared to learn a lot through this experience and maybe even win a little. As he does annually, Mr. David Isaac Pitman, the HSE team director and AP Government instructor for numerous years now, brought together this year’s relatively small group of willing students eager to explore this unique experience.

“We the People” is truly an adventure in civics knowledge. The competition has drawn a reported 31,000 students and 1,000 teachers to the National Finals in D.C. since it began in 1987. This will be the 31st year of competition, held at the National Conference Center in D.C. Each team in attendance placed first in their state, and we are so proud of our High School East team that also placed first in New York. Parts of the competition are held in hearing rooms on Capitol Hill. The competition will include simulated congressional hearings, and students will testify as “constitutional experts” before the panel of judges. Each school typically has six groups that make up six competition segments. Each hearing begins with a four-minute opening statement followed by six minutes of questions from the judges who probe the students’ depth of knowledge and understanding of constitutional principles.

While in D.C., students will also have an opportunity to explore the nation’s capital and learn about government and governance as well as meet with elected officials and dignitaries. I am truly excited to be part of this team, and our months of preparation are well worth this adventure.

In addition to getting a deeper appreciation for our Constitution, one thing I have also appreciated is being a more aware citizen who eagerly signed up to vote the minute I turned 18 earlier this year. Competitions like this have the power to deepen the civic sense in students and truly remind us of our critical role in being an active part of this democracy. This year has already been one of the deep awakenings of our nation’s high school population since the unfortunate events of the Stoneman Douglas High school shooting in Parkland, Florida. We have seen young students take to the streets to advocate their views on their constitutional rights and become activists at quite an early age. The “We the People” competition is a wonderful enhancement of the proactive and engaged student of today, and, no matter what your lifelong interests are, it is still great to be able to explore our constitution on Capitol Hill.

So, to people like my sister – Gibran Boyce – who had an amazing team, but did not get to nationals two years ago, I say “Sorry,” and we will happily take the mantle and represent our district this year. And to my peers on the “We The People” team and our amazing Mr. Pitman who leads us, I say “Break a Leg” for a job well done and what’s to come in D.C.