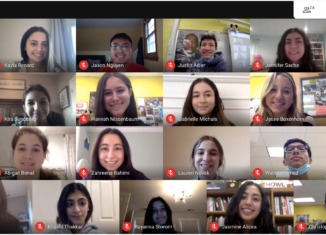 When choosing an AP Government class, there is one very special option at High School East – AP Government: We The People. This class is an AP Government class that focuses on diving deep into the Constitution by spending half the year preparing for a competition. In this competition, classes from different schools across the state compete as a team broken down into units. There are six units per class, and the scores from each unit get tallied up to a final team score. Mr. Pitman teaches this class and coaches the teams. With his guidance, the HHH East We The People team was able to take first place in this year’s state competition!

As a part of this class, I was placed into one of the six units to write a speech answering a specific question and prepare to answer follow-ups. The first unit attempts to answer the question, “What Are the Philosophical and Historical Foundations of the American Political System?” Unit 2 focuses on “How Did the Framers Create the Constitution?” The third unit strove to answer “How Has the Constitution Been Changed to Further the Ideals Contained in the Declaration of Independence?” Next, Unit 4 investigated the question, “How Have the Values and Principles Embodied in the Constitution Shaped American Institutions and Practices?” Unit 5 answered “What Rights Does the Bill of Rights Protect?”, and Unit 6 focused on the question, “What Challenges Might Face American Constitutional Democracy in the Twenty-first Century?” All groups were very well prepared to answer these questions, and each did a great job at the competition.

Normally, the competition is held in person, but this year it was held over zoom. However, the flow was still smooth, as judges weaved in and out of different team’s competition rooms. In a typical year, the winning team of the state competition moves on to compete in Washington DC on a national level, and the class takes a week-long trip to Washington DC for sightseeing and competing. Unfortunately, this year that was not possible, so instead the national competition will be held over zoom. While the AP Government We The People team of 2021 will not get to celebrate as they would in a normal year, it is still a huge accomplishment for the students and their teacher!