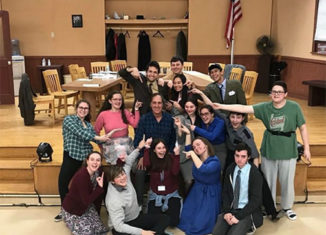 On Friday, December 14th, and Saturday, December 15th, Hills East delighted audiences with the play Twelve Angry Jurors. After many months of hard work, the students truly did an amazing job. In juror number order the cast included Grace Bleck, Danielle Albrecht, Ben Keschner, Jolie Branstein, Alyssa De Villa, Sam Benson, Frankie Altamirano, Sam Abramson Hailey Elberg, Matthew Rubinfeld, Xinwen Zhang, and Rachel Sacher. The Judge was played by Ethan Bart, and the Guard was played by Chris Goldblatt. Directors John Lilla and Doc (Danielle McRoy) did an incredible job putting together a show that would keep the audience on their toes and left us with a story we’d never forget. The two student directors, Anna Laimo and Marlee Futter, also did an amazing job directing their peers to perfection.

Twelve Angry Jurors is an adaption of a Reginald Rose’s original story which was later turned into a movie. The show is about a young boy put on trial for the murder of his father. When a preliminary vote is taken, all but one judge is decided on the boy being guilty, and he does not stop until every single juror is on his side, switching their votes to not guilty. The stage came to life with every word leaving the audience speechless as they admired the unmatched talent of these young people. It felt like a Broadway show!

This show was by far one of the best plays performed by High School East students in recent history. If you did not have the amazing privilege of seeing this show, be sure to make it to the spring musical, The Drowsy Chaperone, in just a few short months. On behalf of the Thunderbird staff, congrats to the cast and crew of this show! You all did an amazing job!