February 14 is a date that stands out to many, primarily because it’s Valentine’s day, a holiday dedicated to love. However, this day now has a new significance in history and will forever have a different meaning to the community of Parkland, Florida. On February 14, 2018, seventeen innocent people’s lives were taken away by a school shooter at Marjory Stoneman Douglas High School. Nearly two decades after the horrific events at Columbine High School, these shootings have become all too familiar. While many have staged a silent protest in their hearts for the past twenty years, many more are living in a world where they’ve become jaded to hearing of such attacks on the news because they have become far too “normal.” Those silent protests are no longer enough because enough is enough. We are the future of this country, and we need to stand up for our rights. The victims of these horrific incidents no longer have a voice, so it is our turn and our obligation to take a stand. Since the start of this school year, there have been at least twenty different school shootings, of various magnitudes, across the United States. After such heartbreaking tragedies, thoughts and prayers are kind, but they do not enact necessary policy and security changes. It is more important that we channel the energy of our thought and prayers into action.

Tragedies have led many students to fear for their safety in school, a place that should serve as a safe haven from the challenges of the world. In response, many students want to make a change and honor those whose lives were taken. Despite a variety of different beliefs within the diverse Half Hollow Hills community, High School East came together during this time of heartbreak. To kick off the month of March, High School East students and faculty members participated in the 17 Acts of Kindness project. In honor of the seventeen victims of the Parkland, Florida school shooting, each day, for seventeen days, High School East came together to partake in different acts of kindness. Actions such as saying hello to a stranger in the hallway or complimenting someone were encouraged in order to promote kindness throughout the school. Students and faculty members were also asked what they were going to do to make a difference and be a better, kinder person.

On March 14, 2018, exactly one month after the shooting at Parkland, a national school walkout was initiated by survivors and supporters alike. March 14 will now be known as a momentous occasion where students across the nation took a stand to honor the lives lost at Parkland and to fight for improved school safety. Schools across the United States took various different approaches to handle the national walkout; some schools were unaffiliated with the walkout, some forbade students from walking out, and others provided students with an alternative way to exemplify civil disobedience. Although the High School East faculty did not endorse the walkout, many students silently and respectfully walked out of class at 10:00 am, spending seventeen minutes peacefully protesting in honor of the innocent victims from Parkland, Florida and all schools victimized by school shooters throughout the course of our lifetimes. Students wore red, Marjory Stoneman Douglas High School’s color, to further honor those affected by this devastating event. A handful of members of the student body stood up in front of the crowd as they read the names of those who were killed in Parkland and said a few words about each of the victims. Moreover, these students spoke their minds and delineated different ways to help make a difference, such as attending upcoming marches and signing a petition for enhanced school safety regulations. Together, the students chanted “We want change!” and shared a moment of silence in honor of the victims. Scott Biegel, a 35-year-old teacher at Marjory Stoneman Douglas High School and a High School East Alumnus, was shot and killed while sacrificing his life to protect his students. Scott was a teacher and a cross-country coach who will forever be remembered for his heroic actions on February 14. His mother, Linda Schulman, stood with the High School East student body at the walkout in honor of her son, Scott. 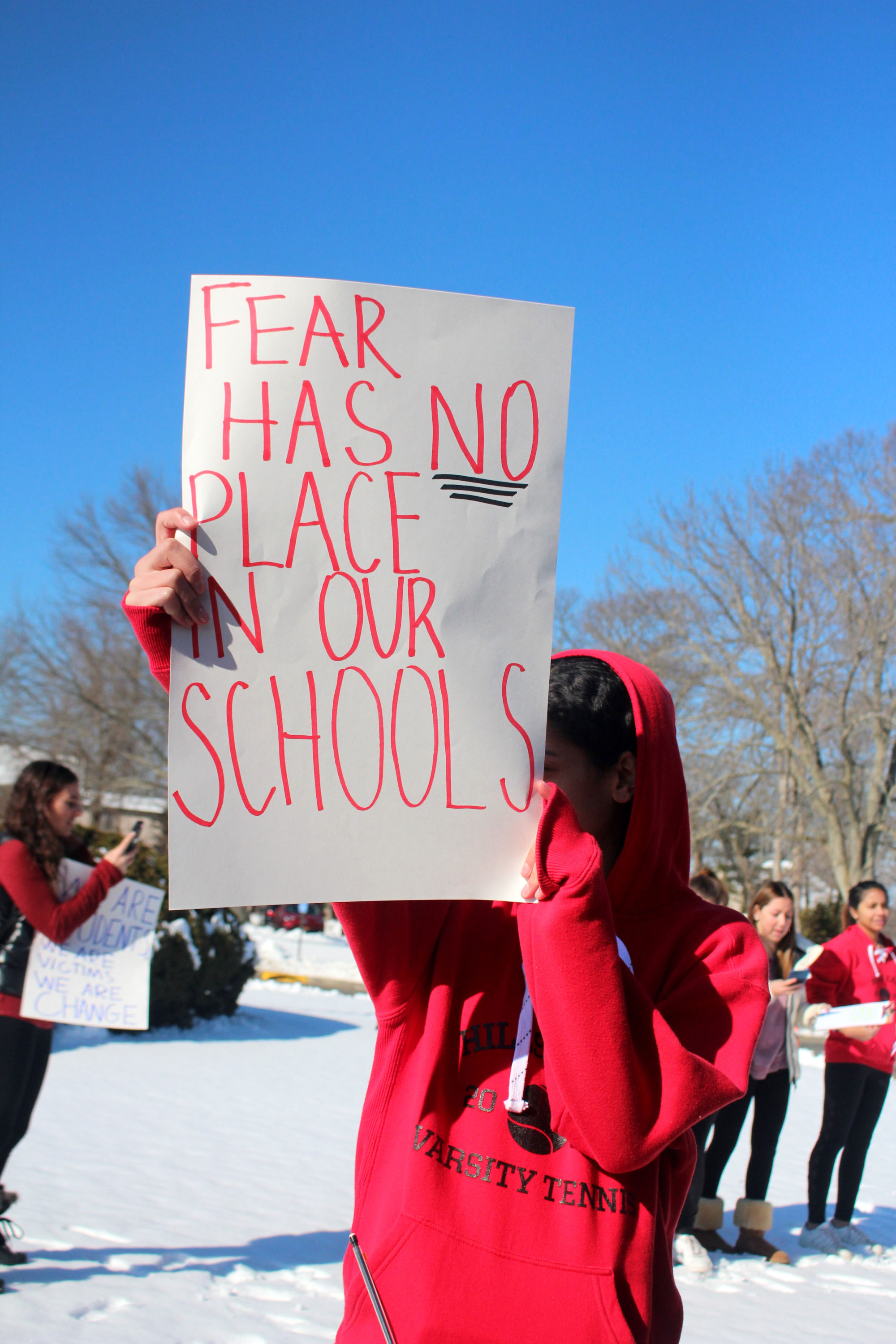 Since the walkout, things have started to change at High School East and at high schools across the country. HSE began by requiring that all students and faculty wear their identification cards at all times. While it may seem small, this action is a step in the right direction and shows that our voices were heard at the walkout, and we can ignite change. For too long people have stood by with the “it won’t happen to me mentality” as tragic events continued happening around the world. That is no longer the attitude. Now is our chance to change the course of history. It is our time to stand up, walk out, and make a difference.