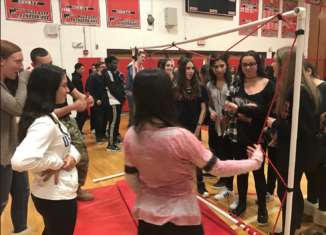 Have you ever wondered what it is like to be a soldier in the Army? While students at HSE haven’t had the opportunity to experience the life of a soldier, recently students were fortunate enough to get some insight from a group of soldiers during their physical education classes.

On Thursday, January 12 and Friday, January 13, a select group of soldiers from West Point Academy presented their stories to all students during their PE classes. Of this group of soldiers, two are Olympic caliber wrestlers. One soldier was an aviation officer who served in Germany for two years. Part of his inspiring journey was that he had the opportunity to go to 50 countries and gained more traveling experience in addition to his service to our country. Another soldier, John, was responsible for recruiting members, completing orders, and taking care of the uniforms. Another soldier, Sergeant Williams, was in charge of communications within the program. One soldier, Jenn, told her remarkable story to the students. With hard work, perseverance, and overcoming adversity, Jenn became the national champion for women’s freestyle wrestling. Jenn faced many obstacles growing up as the only woman on her school wrestling team. She talked about her stubbornness as a child that made her determined enough to reach her goal of becoming a notable wrestler. Students and teachers alike were extremely impressed by all of the soldiers’ stories.

After hearing the soldiers’ stories, students were able to do team building exercises in order to gain perspective on what it is like to be a soldier. Students got into groups and learned one of the most important lessons about being a soldier: teamwork will always get you far and help you perform to the best of your ability. First, each group had to do a set of planks and then a set of lunges. Students got first-hand experience of being under pressure as the soldiers persuaded students to complete these activities expeditiously. While waiting for the next activity, students had to do sets of push-ups, wall sits, planks, and jumping jacks. Some of the soldiers joined in, and their skills were truly eye-catching as they did these exercises with ease. The next activity was for a group to carry one of its members and then weave this member through a web of ropes. Once this was accomplished, the next activity required students to walk on a very thin balance beam. The final activity called for a group students to walk on a stand together across one side of the gym, while the student in the front was blindfolded. The fun didn’t stop with PE classes as two of the wrestlers also ran a combined High School East and High School West clinic after school at HSE on Thursday of the same week.

Although many of the activities were challenging, students experienced the fun of overcoming obstacles together. The life lesson of the need to trust and cooperate with one another in order to be successful in various circumstances, as well as grasp a better idea on what it is like to be a soldier, is invaluable and will surely not be forgotten by HSE students any time soon.