You are here
Home > School Sports > Clock In, Clock Out: Thunderbirds Seek Redemption at the LIC 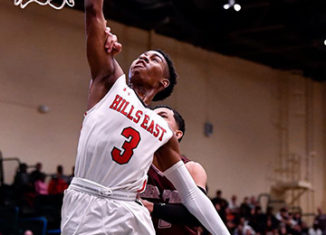 Two points. That was the difference last year between winning and losing for the Hills East Basketball. The tragic ending to a spectacular 2017 season left the T-Birds wanting more. The 2018 season has been almost breathtaking as the team has continuously dominated the top teams on Long Island, including as Brentwood, Deer Park, Ward Melville, and Chaminade. The Thunderbirds, led by guards Savion Lewis and Julien Crittendon, once again find themselves back in the Long Island Championship game where they are looking for redemption and the chance to play for the State Championship in Binghamton.

After beating Brentwood by 20 points in the Suffolk County Semi-final and Deer Park by 22 points in the Suffolk County final, the senior-heavy team finds themselves in the same position as last year. Losing only one starting senior last year, the Thunderbirds are coming back with the same starters who over the course of the past year have put in hours and hours of hard work both in the gym and on the court. Before school, after school, and even late at night, they are living and breathing basketball. The team knows that in order to win, they have to be different; they need to seperate themselves from the other top teams on the island. Their hard work and perseverance is what led them back to the Long Island Championship for back to back years. Now, the outcome needs to be different.

The team’s eventful season was made possible by the outstanding play of the senior backcourt, including Julien Crittendon and Savion Lewis. Being elected 1st team all state and averaging around 20 points per game last year, Savion has truly outdone himself. This year, Savion’s early morning practices and late night grinds have put him in place as the top  scorer on Long Island, averaging around 33 points per game, including one game where he scored 50 points. Savion has also been nominated for the Mr. Basketball award. This award goes out to the best basketball player in New York State. The award was won by Tobias Harris, a High School West graduate and current NBA player, in 2010. Julien Crittendon has also given opponents something to worry about. His relentless scoring and ankle breaking dribbling force teams to contend with two dynamic scorers at once. Savion and Julien are, undoubtedly, forces to be reckoned with, however, the team’s success would not be what it is without Kendall Clark, Kenneth Mathurin, and Max Caspi grabbing rebounds and blocking shots.  Their smooth transition game and strong defense makes it tough for opponents to beat them, especially when Shane Dean is on fire from beyond the arc.

The Thunderbirds play against Uniondale in the Class AA Long Island Championship on Saturday, March 10th at Farmingdale State College. This long-awaited matchup contains some of the greatest talent that Long Island has seen in years, from both teams. Uniondale took Nassau County by storm this year, while our Hills East squad is making their LIC appearance for the second year in a row. Senior Captain Savion Lewis came into this season motivated by last season, stating that “Hills East basketball has unfinished business.” After just barely letting the title slip out of their hands last year, the Thunderbirds will be coming back with a vengeance, looking to accomplish their goals and secure their legacy.