For as long as High School East can remember, the Girls Varsity Tennis team has always been one of the best teams on Long Island. As seen in Newsday and the Long Island Tennis Magazine, the girls have always been on top. This year so far, the tennis team has had a record of 11-2, and now holds the title of Suffolk County League Champions, which is shared with their rival, Commack High School.

Throughout the season, the team has utilized the skills of teamwork and communication to win their matches, while exhibiting the utmost respect for their competition and  sportsmanship. After speaking with the team’s captain, Gina LoRusso, it is obvious that she believes that our team’s key to success is our close-knit bond. Gina states,  “We are all really close, like sisters, and we want to win for each other.” 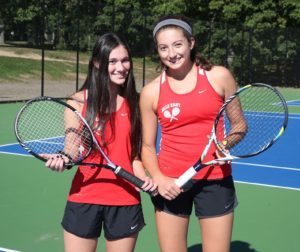 The team has been working as hard as ever this year to earn the title of Suffolk County Champions once again. If they were able to do it last year, we can do it again this year. Recently, the Suffolk County individual tournament was hosted at HHH High School West. The doubles team of Ariana Malik and Lauren Cherkin, as well as the team of  Gina LoRusso and Alexis Huber have both earned the title of all-county. We will see them make it all the way to states this year, which is very exciting. Stay tuned for the results of states.

The team recently started their journey to win counties once again, however, they were defeated by Ward Melville on October 21st in the semi-finals. Despite this loss, the team had great success once again. Go Lady T-Birds!