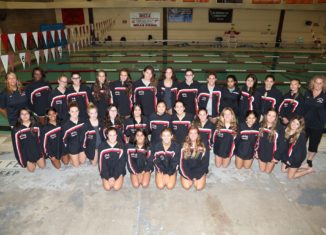 The Half Hollow Hills Girls Swim Team is at it again. They’re poised to prove that they are, without a doubt, the best of the best. With an undefeated season already under their belts, the girls will go on to compete at Sachem North on Wednesday, October 26th for the coveted  League title. Assuming all will go as planned, they will continue on to Counties, which will be held at Suffolk Community College on November 5th. These young ladies show talent, dedication, and desire in the pool as evidenced by four swimmers being selected for the state championship this year, which will be held November 18th and 19th in Ithaca, NY. Representing HHH with this prestigious honor are Kelly Lennon (50 free, 100 free, and 200 medley relay),  Baylee Scharf (100 fly, 200 medley relay), Elizabeth Park (200 IM, 100 back, 200 medley relay), and Rhea Randhawa (100 back, 200 medley relay). The medley team of Randhawa, Park, Scharf, and Lennon (in that order) is a force to be reckoned with as evidenced by their continued ability to endure and out-swim the competition. Best of luck to the HHH girls swim team as they continue on their journey to maintain a perfect season and leave a legacy that won’t soon be forgotten. 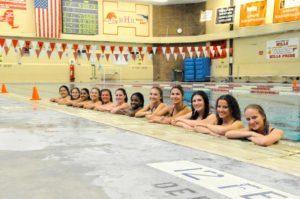