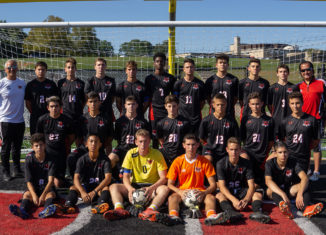 By: Alex Zeh and Josh Foodim

This year’s soccer program for High School East started in late August with hopes to continue its run as a local powerhouse. Before the school year started, these dedicated players were met with intense twice a day practice sessions. As the first day of preseason started, the boys had to come in early and be prepared at the track to condition for the start of the big soccer season ahead of them. Many drills, touches, and shots prepared us for the regular season starting with scrimmages during Labor Day weekend.  Over the past 10 years or so, the Hills East soccer program has had much success, and this year should be no different. We came into the season with the playoffs in our sights. Divided into Varsity, led by Coach Carcone and Assistant Coach Leone, and JV, led by Coach Oscar, HSE Soccer gives it their all on and off the field.

This year’s captains were Reid Feldman, Jesse Greissman, and Ryan Koval. All three of them offered leadership and dedication towards their teammates and gave it their all in every single game.  In fact, our goalie Reid Feldman had the second most saves on Long Island with 139 saves throughout the regular season. Unfortunately, we fell just short of the playoffs as we were only two games out. Our overall record was 6-9-1, but our league record was 4-8-1. This is the second year in a row that Hills East has fallen short of the playoffs, but we will not give up. Next year will be our year, and we hope to make a huge turn around next season with many returning, talented players from this year’s team.