You are here
Home > School Sports > HSE Basketball is BACK! 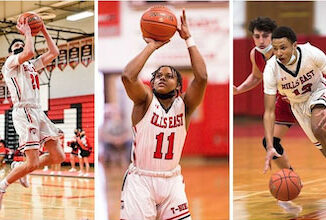 Beginning January 4, 2021, the Half Hollow Hills school district, along with schools all across NY, started allowing athletics to take place after a long hiatus resulting from the Covid-19 pandemic. Basketball was one of the first teams to have games outside of the district. The JV basketball team was ecstatic to hear this news. Although it was fantastic that practice and games could take place, especially after such a long period without exercise or sports, there were still some drawbacks of course.

These disadvantages affected not just the students, but also their parents and peers. The idea that players had to wear face masks during practice and games was one of several drawbacks as a result of the season’s outset. Second, during timeouts and huddles, teams had to maintain a social distance from their teammates and coaches. This will allow the opposition team to hear the basketball team’s strategies, which is not ideal. During tournaments, teams typically shake hands with their opponents as a show of sportsmanship. Unfortunately, this was not feasible due to COVID-19 limitations. Finally, players were required to have their temperatures taken before each practice and game, as well as getting covid tested every Saturday morning. Other than the fact that it can be annoying, there are no drawbacks to this when one is just becoming more conscious of one’s health. Regrettably, the most serious disadvantage of it all is being quarantined. The boys’ junior varsity squad was forced to quarantine, and their season was postponed for ten days. The squad did, however, get to play a few games and scrimmages for about a week after their quarantine was done.

On the other hand, girls’ basketball was thriving. Yes, they got to play, but they had to obey a number of strict rules. All girls had to be wearing a mask at all times. Wearing this mask could make you more tired, especially throughout the entire game, so the coach allowed them to go out of the game for a few minutes to take mask breaks. When traveling to games that were located at other schools, the seats were limited to only one person per seat. Normally, two people could sit together, but spreading out would limit the amount of contact the girls have with each other, which has been proven to prevent the spread of the virus. In addition, at practice, the bags had to be six feet apart, and when they were given water breaks, they had to be distanced to keep everyone safe. Although these limitations were frustrating for the girls and the boys, they were still able to enjoy somewhat of a season this year.