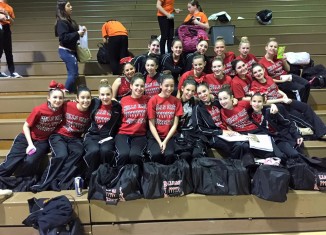 The 2015-2016 season for the Hills East Dixettes proved to be a success! Since August, the Dixettes have been practicing their skills to shine at Pep Rally in front of the Hills East student body and faculty and to compete in three regional competitions. Their hard work paid off as they placed third out of eight teams in their Pom routine.
The Dixettes opened the season with their high energy Fall Pep Rally routine. They sparkled as they danced to the latest pop hits. The following day, they marched in the homecoming parade and performed their polished homecoming dances as the band played proudly behind them. After homecoming, the Dixettes began practicing for the Scholastic Competition. Several teams were present at the competition, but very few could keep up with the Dixettes. They performed their Pom routine to the song “Bun Up the Dance” and their kick routine to the song “Love is Blind.” At all three of their competitions, they placed third in the Pom routine. This was a great accomplishment that made all of the girls and their coaches very proud. As their season came to a close, the Dixettes dazzled at spring pep rally with their “outer space” themed dance. They enjoyed performing and helping to generate High School East spirit for the coming sports season.
This season was an interesting season because halfway through, their beloved coach, Nicole Cancel, had to leave us due to maternity leave. Their new coach, Katie Tesoro, came in and helped the Dixettes reach their goals as Coach Cancel had been doing for years. The assistant coach, Olga, also helped the Dixettes tremendously this season. The Dixettes truly appreciate the love and support from their coaches and are excited for another amazing season next year!