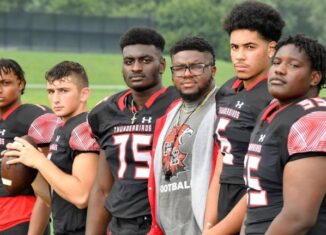 Every year high school athletes wait their turn to get that phone call or that email from a collegiate coach to have them play for their team. This is the dream for every high school athlete. The goal is to take that next step to become a professional athlete.

Signing day. Where athletes around the world sign off papers to go play and compete in collegiate athletics at their dream school for the next four years. As we watch these athletes on television sign those papers high school athletes and ex-high school athletes think to themselves “that could be me if I put the work in or that would have been me if I had never got injured”.

The Hills East Thunderbirds experienced a football season that will change their program forever. Records broken; Dakim Griffin, 2,300 yards in a single season. Division I offers given to several stars of the team; Konadu (Tiny) Boadu and Elias Barrett, just to name a few.

On 2/3/22 at 9:30 a.m., the day had approached the stars of the Hills East football team. The quarterback and the field general, Jacob Robinson had signed with Alfred State University to take his talents to his hometown in New York. After a stellar season under shotgun, Robinson was the leader and commander of this offense under head coach Alexander Marcelin. Robinson helped the T-Birds to an outstanding 7-3 winning-record season and a second-round playoff appearance despite losing to Bellport 34-28. His partner in crime and number one receiver, Shane Patterson, is looking to continue his athletic and academic career at the University of Cortland, still staying close to home in New York. Not only did Patterson fall in love with the football program but Patterson also felt the campus at Cortland was like his home away from home, Patterson exclaimed “the moment I stepped on campus, I felt home academically, the coaching staff and the team made me feel at home”. Patterson will have a great impact at Cortland and will be a key factor in their success and contribute his talents to their offense. Last but certainly not least, Elias Barrett. The defensive general for the Thunderbirds. Just to name some accolades acquired by the star defensive senior: All state, first team all Long Island, all county, Bob Collatta award winner (best linebacker), defensive MVP, and a handful of division one offers. These offers include Columbia, Syracuse, and West Virginia. The senior line backer decided to take his athletic ability to the university of West Virginia. Barrett said “The moment I stepped on campus, I felt at home academically and athletically. The coaching staff and the team made me feel at home right where I want to be and in the best possible situation for my career”. Barrett looks to make an even greater impact at West Virginia than he previously did for the Thunderbirds.

Thanks to Barrett, Patterson, Robinson, and company, the Hills East Thunderbirds played an outstanding season under the leadership of these young men. The T-Birds are hungry for more next season and we will all wait to see what the future will hold.