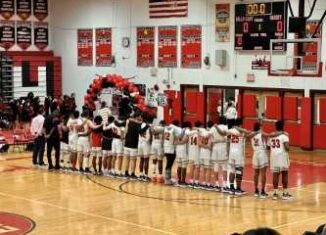 What does it take for a high school basketball team to make nine straight playoffs and have over 10 straight winning seasons? The answer is Xavier Lewis, Derek Varlack, and the supporting cast of the Hills East Thunderbirds. Not only do the players have such a great impact on their success but coach Peter Basel and Mike Marcelin and their terrifying defensive strategy of using the “press”, where a team immediately plays defense on the other team as soon as the ball is inbounded. The Thunderbirds are on the hunt this 2021-2022 basketball season to win their second straight Suffolk County championship. How will the Thunderbirds win this game? With the help of Xavier Lewis and company.

The Thunderbirds had a very shaky start to the season starting 3-3, facing three private schools in LuHi who is a top ranked team in the nation, Chaminade, and Holy Trinity. Following these losses, the Thunderbirds have only lost 2 games and have earned the number one spot in league three, clinching a playoff berth for the ninth year in a row. The Thunderbirds now sit at 12-5 overall, at the top of their conference.

The success of the Thunderbirds has been mainly backed by the number 13 scorer in all of Long Island, Xavier Lewis, who is averaging nearly 21 points per game. Lewis is the clear leader on this Thunderbird squad alongside co-captain Derek Varlack. The Thunderbirds have all the pieces needed for success; Sammy Gerstman on the defensive side, Louis Mathurin with his athleticism, Jordan Heyman and his elusiveness, Chris Connell and his height, Adam Kirschenblatt who is dagger from deep for the Thunderbirds, and the list goes on. Xavier Lewis has led this team to win after win and has had less than 10 points once this season with a season high of 34 points against Copiague. Alongside Lewis, his partner in crime, Derek Varlack, who has had an outstanding season, averaging 15.5 points per game and has had several double-doubles this season.

Xavier Lewis; the 5’8 combo guard, has followed in the footsteps of his brother Savion, who was named Mr. Basketball of New York State in 2018 and now plays at Quinnipiac University. Xavier now leads the Thunderbirds like Savion once had. Lewis, Varlack, Gertsman, Heyman, Mathurin, Kirschenblatt, as well as coach Basel and Marcelin, and the rest of the deep and diverse talents of the Thunderbirds roster have helped them reach the point they are at today.