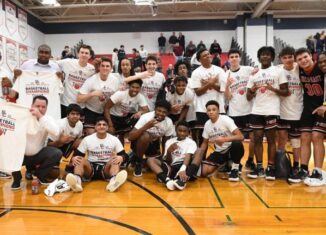 On Saturday, March 23rd at Hofstra University, the Hills Eats Thunderbirds took on the 22-0 undefeated Baldwin Bruins who hold the number one seed in all of Nassau County. The Bruins led by senior guard Jamir Stewart, who was the second leading scorer on Saturday contributed 22 points to the Bruins victory over the Thunderbirds. Alongside Stewart, Joshua Petion and Cadeem Ramsey added 13 points to the Bruins victory over the Thunderbirds. Although the Thunderbirds suffered a tragic loss, captain Xavier Lewis and a top ten scorer on all of Long Island averaging nearly 22 points per game and co-captain Derek Varlack helped put the T-Birds in the situation they were in up to the point of the championship. Lewis led all scorers in the game Vs. Baldwin with 23 points while Varlack was not far behind, adding on 17 more points. The Thunderbirds concluded the season 19-7 overall and 14-2 in league play. Not only did the players have the greatest impact on the outcome of the game but the student section and the fans for the Thunderbirds were electric. The Hofstra University venue site allowed for more and more fans to help support and cheer on both teams. Although the T-Birds lost in gruesome fashion after being up by one 34-33 going into halftime and eventually losing 79-68 did all they could to take down the Bruins and keep on dancing. As the Thunderbirds deep playoff run season came to an end, the T-Birds put on a show for not just the fans but the other teams as they showed how they were such a well balanced and well coached team under coach Peter Basel and Mike Marcelin. The 2021-2022 basketball season was certainly one for the books for the 2022 Suffolk County Champions, but as we look forward in the future, the Thunderbirds are just getting started and are ready to be back in the Long island Championship in no time.