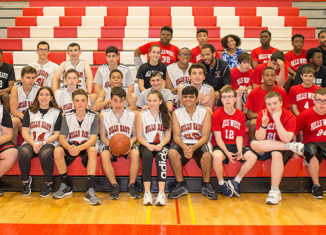 Sports can be an exciting and fun way to get people to work together in order to win. For most kids, organized athletics are pretty easy to join. There are intramural, travel, and high school leagues for the most popular sports amongst teenagers. However, for some kids, especially for those with disabilities, being involved in organized athletics can be difficult. In an effort to allow kids with special needs to have a chance at being part of a team and work with others their own age, the New York State Public High School Athletic Association (NYSPHSAA), in collaboration with the Special Olympics, launched Project Unify. Project Unify has three main goals: to give each and every player an equal opportunity to compete and contribute to their team’s success, to provide kids with special needs with the chance to take on leadership roles in their communities, and to provide all students (regardless of disabilities) to participate in school-wide activities and campaigns.

Recently, Hills East, along with other Suffolk County schools, joined in on Project Unify and created the Unified Basketball League.The Suffolk County league consists of seven teams and two divisions. Division 1 is composed of Hills West, Northport High School, William Floyd High School, and Amityville Memorial High School. Division 2 is composed of Hills East, Southampton High School, and Walt Whitman High School. The rules for the games are basically the same as they are for any basketball game. However, out of the five players on the court per team, two of them have disabilities. Not only this, but no player is told which players have disabilities. The purpose of this is to encourage participation by all players and to stimulate team collaboration.

Perhaps the biggest difference in this league, however, is the overall atmosphere of the gym. In a more traditional high school basketball game, the importance of winning is extreme. Coaches often utilize only part of their rosters in order to keep the best players in rotation. The crowds are also involved, whether it be cheering for the home team, heckling against the away team, or yelling at the refs about a missed call. The Unified Sports League is not like this, which makes this league very unique. There is no real importance placed on winning or losing. The only thing people care about in this league is that everyone enjoys themselves and has fun. “The atmosphere here is so different than an ordinary game,” said Jess Womble, senior point guard for the Hills East varsity women’s basketball team and Cortland-commit. “We don’t cheer for a winner in the stands; we cheer for everyone, even the players on the other team.”

The fun doesn’t just happen during the game, though. During timeouts, breaks, and half-times, players and spectators have dance parties and sing-alongs. “There was a dance break during half-time”, said Sophia Tawil, another member of the Hills East varsity women’s basketball team. “Everyone was cheering, dancing, and laughing. It was a great thing to see and be a part of.”

Hopefully, Project Unify can continue on for years to come and grow to become an even bigger part of high school sports. Despite the fact that Hills East won the Division 2 championship on Tuesday, May 29th, 2018, the kids on the team don’t play to win. They play to be a part of something bigger; something that can change the lives of a few exceptional kids.

Congratulations to all the athletes who were on the team: