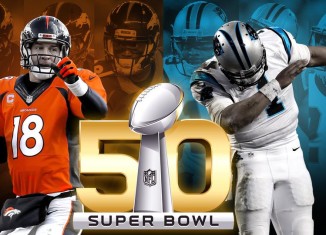 By Jacob Broxmeyer and Zach Leff

Super Bowl 50 was an exciting one as the Denver Broncos defeated the Carolina Panthers 24-10. This was not the outcome most people were expecting; going into the Super Bowl, the Panthers had obliterated everyone in sight and were clearly the anticipated winners. As for the Broncos, they were coming off of a very tight victory over the Patriots in the AFC championship game. Going into the game, the Panthers were favored by six points and seemed like the safe pick. However, those expectations were not fulfilled

From the first quarter, the Broncos looked like the superior team. Led by their tremendous defense, the Broncos jumped out to a quick 7-0 lead when linebacker Von Miller sacked and stripped Carolina quarterback Cam Newton. Malik Jackson, defensive tackle, picked the ball up and returned it back for the touchdown. Then, early in the second quarter, Carolina running back Jonathan Stewart punched in a one yard touchdown to cut the Denver lead to 10-7. However, from that point on, the game was dominated by Denver and their unreal defense. Led by All-Pro linebacker, who would go on to be named Super Bowl MVP, the Broncos put consistent pressure on Cam Newton the whole game. The pressure was nothing like Newton had ever seen, resulting in his struggling throughout the whole game. Newton ended the game with lackluster numbers of 18-41 for 265 yards, no touchdowns, and zero interceptions.

Although future first ballot Hall of Famer Peyton Manning did not have a great game, 13-23 for 141 yards, no touchdowns and one interception, it didn’t matter as the Broncos were able to ride their defense and smart clock management into the sunset. This game would prove to have other significance, as it became the last game of Peyton Manning’s illustrious hall of fame career. Peyton will truly be missed by the fans of the NFL as he is one of the greatest individuals to ever play the sport. Super Bowl 50 was a great one, but now it’s time to get ready for September. Let’s get ready for some football, and the quest for Super Bowl LI!