You are here
Home > Sports > Are you Ready for the Madness? 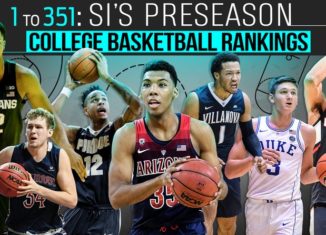 Last year, college basketball was undeniably great, but this year might be even better. Throughout the first month of the season, the Associated Press Top 25 has drastically changed. Some undefeated teams in the AP Top 25 include Duke (10-0), Kansas (7-0), Villanova (8-0), and Miami (7-0). There are currently five teams in the Top 25 that weren’t on the list before the season, and five teams that are no longer on the list. A major surprise is that Arizona, ranked 3rd in the preseason, has fallen out of the Top 25 after three consecutive losses in the Bad Boy Mowers Battle 4 Atlantis. However, the one team that has not moved up or down in the rankings is Duke, who has remained atop the list throughout the month. With that being said, the Final Four can almost be predicted, even this early in the game.

Duke is the powerhouse of the nation. They have stayed at number 1 in the power rankings and beat Michigan State (the number 2 team at the time) in the State Farm Champions Classic. Duke also took down Florida (#7) in comeback fashion, as they were down 17 in the second half and came back to win by 3. Their best player is Marvin Bagley III, an absolute rebounding monster, and their leader is the senior Grayson Allen. Duke is a juggernaut who will be extremely hard to stop in the NCAA Tournament.

I believe that Florida is a legitimate Final Four team. They have a returning KeVaughn Allen, a junior, and Chris Chiozza, a senior. These upperclassmen are great leaders and helped get their team to the Elite Eight in last year’s NCAA Tournament. Florida is currently ranked number 5, and their 6’11 center John Egbunu hasn’t even played a game yet because of a knee injury. When Egbunu returns, Florida will be a dangerous team.

You can never count out Roy Williams and his squad. This team is always dangerous during the tournament, especially considering they made it to the championship two years in a row and won it all last year. Despite losing a lot of players to the NBA draft, including Justin Jackson, Kennedy Meeks, and Isaiah Hicks, UNC still has loads of talent. Joel Berry, the heart and soul of the team, has returned, and they need that kind of leadership when a lot of players don’t come back. Luke Maye has also returned for his junior year. Although he is well-known for his game winning shot against Kentucky in the Elite Eight last year, Maye has improved substantially, averaging 21 points and 10 rebounds a game. His outside shot has also improved, shooting 15.4% better from behind the arc this year than last year. Even though they suffered some losses early in the season, this team will be very dangerous when March arrives.