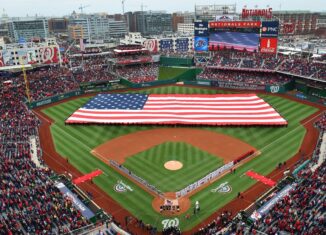 Baseball. It’s a simple sport. A bat, a ball, a glove, nine players, and four bases. Why is baseball America’s pastime? “From the Civil War to Civil Rights and all points in between and beyond, the game of baseball supports and reflects many aspects of American life, from culture to economics and technological advances. It inspires movements, instills pride and even heals cities.” (Baseballhall.org). Baseball holds a special place in all Americans’ hearts because it is a sport that has stood the test of time.

Baseball dates back to before the Civil War. The modern-day game of baseball first started in September of 1845 when a group of men created the New York Knickerbocker baseball league. This league implemented the diamond-shaped infield, foul lines, and the rule of three strikes. From there, nothing could stop the game of baseball, not even World Wars. During World War I, professional baseball was played, but the season was shortened. During World War II, despite more than 500 major league ballplayers serving in the armed forces and putting their careers and lives at risk, baseball still managed to continue. Baseball was so important to the American people during the war that President Franklin Delano Roosevelt wrote the “Green Light Letter” which requested that baseball be played despite the ongoing war.

American’s thirst for baseball created so many opportunities for everyone to play. When most men went off to fight in World War II, women took their spot, and the All-American Girls Professional Baseball League was created to fill the void. Even Covid-19 was not able to take baseball away! No one thought baseball would come back, but Major League Baseball demanded play to go on for the 2020 season, even if it meant doing so without fans in the stadium. The season may have been shortened, but it did happen. As such, the 2021 season started on time and now fans are able to be back in the stadiums while following certain required protocols.

What makes baseball so special that it has withstood the test of time? Maybe it’s the suspense during the winter months waiting for the season to start. Especially this year, because of COVID, the fans have waited and are excited to visit their favorite ballpark again. Hot dogs, hot pretzels, cotton candy, popcorn, and soda are all part of the baseball experience and are woven into American culture. All winter long, we have analyzed and talked about the players.  Who is making a trade?  How is that trade going to affect my home team?  Who is going to be a starting pitcher? Who has playoff potential?  These are the questions that so many Americans ask year after year and is what has made baseball an American tradition for more than 150 years.

Americans love baseball because of everything surrounding it. It’s the history and the players. Barry Bonds’ single-season home run record, Pete Rose’s 4,256 hit total, or the 3000 hit club,  which only a very small number of players have accomplished, all keep the fans glued to the television to see who will be the next player to break those records and witness history. The saying “It ain’t over till it’s over” is true because one team can be down by two runs in the top of the ninth inning, then they come back and tie the game to go into extra innings. Baseball has lasted through war, social and political movements and uprisings, and even Covid-19. The future of baseball is focused on new technology, better equipment, stronger and faster players, and of course the “automatic-replay”. Technology has enhanced the baseball experience with more ways to watch and follow the game so that we all never miss a minute of our American Pastime.