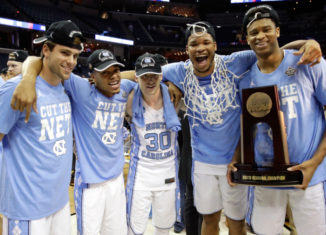 This year’s NCAA tournament was a wild one to say the least. While the first round did not live up to its usual madness in terms of upsets and buzzer beaters, that was made up for in the Round of 32 when Wisconsin took down defending national champion, Villanova; Michigan beat Louisville; Xavier destroyed Florida State; and South Carolina eliminated Duke. The Sweet 16 also provided some great games and surprises. Oregon barely beat Michigan; Florida hit the tournament’s first buzzer beater in overtime against Wisconsin; and De’aaron Fox took down Lonzo Ball and UCLA. The Elite Eight’s craziest game was when Oregon took down Kansas. The National Title game, however, was one of the worst in recent memory with UNC defeating Gonzaga by just 6 points.

While this tournament consists of many teams playing in multiple match-ups, the best game of the tournament was definitely Wisconsin vs. Florida. Florida may have outplayed Wisconsin in this game, but the Badgers never died. Down by double digits with under four minutes left, the Badgers fought back to be down by just 3 with around 4 seconds left. Then, Zak Showalter hit exactly what they needed: a wild three to send the game into OT. In celebration, Showalter gave the discount double check to loyal Wisconsin fan Aaron Rodgers. Late in overtime, Nigel Hayes hit two free throws to put Wisconsin up by two. Then Chris Chiozza hitting a running three at the buzzer to break the hearts of the Badgers and their fans. Despite Wisconsin’s loss, these was a great game for all involved.

With so many talented young players on these teams, it’s difficult to decide who gave the best showing. However, it can be easily argued that the player of the tournament was Sindarius Thornwell. Thornwell lead the Gamecocks to their first ever Final Four. This was an unbelievable achievement for a player who had been underrated all year.