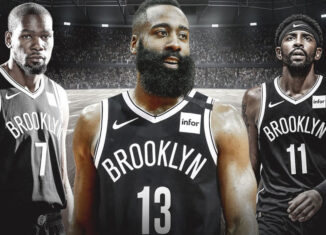 The 2021 NBA season has begun and the Brooklyn Nets have made some big changes to their team. Since last season, Kevin Durant, Kyrie Irving, and James Harden have all joined the ranks of the Brooklyn Nets.

Kevin Durant was previously on the Golden State Warriors, but he chose to leave this incredibly well-performing team behind for various reasons. During the 2019 NBA finals, it seemed that Durant’s time on the Warriors would be coming to an end after his serious Achilles injury. When asked why he left the Warriors, Durant simply said, “I felt like it was time for a change. I wanted to play for a new team.” Also, Durant felt that he never really fit it with Stephen Curry, Klay Thompson, and the other players. “I started to realize I’m just different from the rest of the guys,” Durant said. As a result, the Nets acquired Durant through a sign-and-trade deal and agreed to a four-year, $164 million contract with Durant.

Kyrie Irving signed on with the Boston Celtics in 2017. However, it seemed that this partnership wouldn’t last past the 2018-19 season. A major factor that caused Irving to leave the Celtics was the death of his grandfather. Irving had to reevaluate his priorities and decided that playing closer to home was more important. In an interview, Irving said, “after he passed, basketball was the last thing on my mind… it started becoming more and more clear that my relationship within my home life has way higher precedence than the organization or anyone.” Irving then returned home to the New Jersey suburbs where he grew up. In 2019, Irving signed with the Brooklyn Nets as a free agent. “I’m grateful to see it unfold and be here today and really talk about how gracious I am to be here,” Irving said about playing for a team that keeps him close to home.

Since 2012, James Harden has been playing for the Houston Rockets. However, Harden eventually came to the conclusion that it was not where he wanted to be. Harden wanted to put himself in a position to compete for a championship. He even turned down Houston’s offer of a two-year, $103 million extension. “Harden believes his window to chase championships in Houston has ended, and constructing a super team with the Nets represents his best pathway to a title,” sources said. Harden later commented that the Rockets were just “not good enough.” This year, the Nets acquired Harden through a trade deal with the Rockets. James Harden will once again be reunited with Kevin Durant, and there’s no telling what they can do on the court together.

In the Brooklyn Nets’ history, they have only won two championships, in 1974 and in 1976. Since then, the team has been going through a dry spell. Now that the Nets have a whole new team that includes three high-scoring stars, Durant, Irving, and Harden, they are ranked third in the Eastern Conference. Maybe 2021 will be the first year in decades that the Brooklyn Nets will finally win an NBA championship and title!