You are here
Home > Sports > The Definitive NHL Superteams of 2020 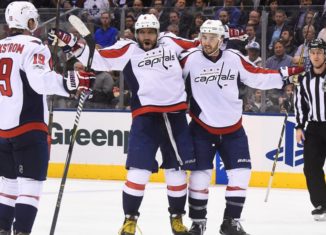 By: Jake Blecker and Aaron Epstein

With the new year kicking off and the new NHL season underway,  we’ve compiled our predictions for who are sure to be the top three NHL teams of 2020.

Washington Capitals: The Washington Capitals started off their season with a record of  30-10-5. The Capitals have two players in the top 20 most amount of points so far this season. Player John Carlson, a defender for the Capitals, has a shocking 54 points which is really crazy considering he is a defensive-minded player. The other player on the Capitals with a lot of points is veteran left wing, Alex Ovechkin. Ovechkin has 42 points and a lethal shot that teams fear when playing against the Capitals. The Capitals have an abundance of playoff experience which is another reason why they are #1 on our ranking.

St. Louis Blues: The St.Louis Blues are still basking in the glow of their Stanley Cup win and have a great record so far this season of 27-10-7. The Blues have had a wide variety of injuries throughout the season, but their great coaching staff and player depth still makes them a top team in the NHL. The point leaders on this team are David Perron(LW) and Ryan O’Reilly(C). With the great experience and fire surrounding this team, the St.Louis Blues are easily at power rank #2.