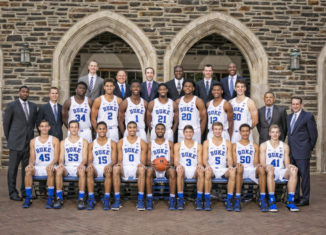 By Ishan Suri and Jimmy Rouse

Coming into the 2016-17 season, Duke was considered the favorite to win the National Championship this year. With Grayson Allen, Harry Giles, Jayson Tatum, and veteran Amile Jefferson, Duke seemed poised to win back to back titles. However, the team isn’t reaching its full potential due to injuries suffered by Giles and Tatum. The freshman standouts were forced to miss key games against Virginia Tech and Florida. Arguably the most disappointing take away from the team thus far is the behavior of captain Grayson Allen who has continued to behave inappropriately on the court by purposely tripping the other team’s players with the intention of hurting them. His inability to control himself forced his Coach, Mike Krzyzewski, to suspend him for one game. Allen has been stripped of the title of team captain and must face the consequences of his actions. Unfortunately, Duke’s situation has gotten worse because Coach K recently announced that he will have to leave the team for a month because of ongoing back pain from which he is currently suffering. With the loss of Coach K, Duke management has come to realize that they have to act fast to ensure they retain a high seed in the ACC.

Despite all the distractions, Duke has seen great success on the court this season. Key players, like Luke Kennard, have stepped up big in the absences of Duke’s other stars. Kennard is a rising star as a sophomore and is their top scorer. They have also gotten support through guys like Frank Jackson, who is averaging double digits in scoring this season. Although Duke has a solid team, other programs around the nation are getting even stronger. Teams like Villanova and Baylor are forces to be reckoned with, both starting the season undefeated. Duke has a solid roster, but it could prove to be harder to snag the title from a top tier team this year than originally thought.