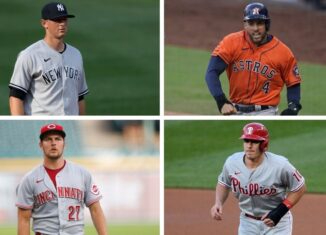 In this year’s MLB offseason, there are five big names to focus on after Marcus Stroman decided to come back for another year with the Mets. These names include JT Realmuto, Trevor Bauer, George Springer, DJ LeMahieu, and Marcell Ozuna.

With Marcell Ozuna, there have not been any definitive reports about whether he would go back to the Braves or seek a larger contract somewhere else. Ozuna is an amazing batter, and Atlanta would likely love to keep him, but it is unpredictable to know what the market holds with him.

DJ LeMahieu, arguably the best second in baseball, is essential to the Yankees’ lineup and is also one of their home run hitters. After Robinson Cano’s suspension, there was some talk about the Mets making a move on him, but it would be shocking if the Yankees let him walk, especially to a team down the road from them.

George Springer is one of the best leadoff hitters in the game and a terrific fielder in center. There are a couple of candidates, but the strongest two are the Red Sox, who are trying to get their team back into contention because they have the money to do so, and the Mets who are a candidate for most of these players due to the new owner Steve Cohen and the money he has to spend. Springer is a little old, but still one of the best center fielders available and could make any team better.

Finally, JT Realmuto is a complete 5 tool catcher and the best in the game. He is a great hitter, is amazing behind the plate, and his relationships with pitchers help any team. Although, the Phillies re-signing him wouldn’t be the most surprising thing. He said he is partially interested in the Mets, but if the money is there, it’s hard to say no. Teams like the Nationals and Angels are both high contenders, as one team is trying to get into the playoffs and the other is trying to not lose all the magic they had in 2019.