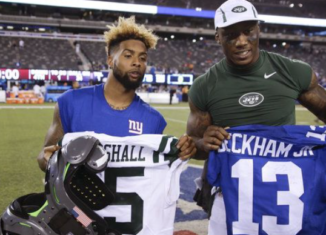 The start of the fantasy football season is not week 1 of the NFL season nor is it draft day for your fantasy league. The season begins during the offseason when the NFL draft is held and when free agency opens up to begin the new season. With that being said, what are the biggest takeaways from this offseason?

Every year, when free agency opens (this year it was March 9th), teams sign players left and right, and it all gets pretty hectic. These moves are critical because they change the value for that player and for those around him.

Brandon Marshall, WR- Brandon Marshall was locked up by the Giants for two years worth $12 million. Although Marshall won’t be switching locker rooms, he will be in a significantly different offense. Besides last year which was burdened by quarterback turmoil, Marshall still proves to be a top 15 wide receiver with his 14 touchdowns in the year before. Eli Manning will have a bigger receiver who has proven that he can punch the ball into the end zone, boosting Eli’s red zone efficiency. In addition, the superstar Odell Beckham, Jr. will also be complemented well by Marshall because he will be able to run more routes from the slot where he thrives. On the other hand, Sterling Shepard will take a backseat to Marshall and Beckham even though he is coming off a fantastic rookie year.

Desean Jackson, WR – This, in my opinion, is a fantastic move by the Buccaneers. Jackson is at the top of the board when it comes to being a big play threat. This year, we saw Mike Evans completely dominate. However, there were many times where Jameis Winston forced balls to Evans. Jackson gives Winston another great option at WR, pushing to be a borderline top 10 QB.

Adrian Peterson, RB- AP will always be remembered as one of the greatest backs in history, but this move does not bode well for his value and portrays that he is on his way out. Peterson was grabbed by the Saints and their crowded backfield for 2 years. Towards the end of the year, Mark Ingram, who put up great numbers on the ground, ceded work to Tim Hightower. With the addition of AP, this backfield only gets more crowded and less appealing. In addition, Brees, who typically throughs an absurd 40-50 passes a game, seems like he may take a cut in workload.

Christian McCaffrey, RB- McCaffery was grabbed by the Panthers with the 8th pick out of Stanford. McCaffery was quiet in his final season at Stanford as he battled injuries and posted only 1600 rushing yards. But he was spectacular in his sophomore season posting almost 3900 all purpose yards. McCaffery is a fantastic fit for the panthers for many reasons. Jonathan Stewart, the Panthers main back, is certainly winding down towards the end of his career at age 30 all while typically missing 4-6 games due to injury per year. In addition, we just witnessed Cam Newton come out flat after an elite year while taking the Panthers to the Super Bowl in 2015. McCaffery gives Cam another weapon while also taking pressure off him.