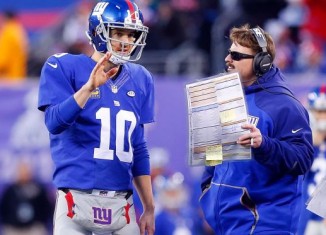 This year, the New York Giants finished the season with only 6 wins and 10 losses. Even though they struggled during the regular season this year, their offseason was extremely good. They did lose a few important players on defense, including defensive lineman Robert Ayers who went to the Tampa Bay Buccaneers, Prince Amukamara who went to the Jacksonville Jaguars, and Jon Beason who retired. However, they added even better players to fill the roles of those who left. They signed: defensive end, Oliver Vernon for 5 years worth $85 million; defensive tackle, Damon Harrison for 5 years worth $46.25 million; cornerback, Janoris Jenkins for 5 years worth $62.5 million; and linebacker, Keenan Robinson for 1 year worth $3.5 million.  On top of this, the Giants were able to resign Jason Pierre-Paul for 1 year worth $10 million, along with other key players. The Giants also reduced Victor Cruz’s contract from around $7 million a year to around $1 million a year, leaving them with extra money to sign another starter for next year. As of right now, the Giants are looking at a few offensive tackles, but they have not signed anyone yet. For this year’s NFL draft, the Giants have the 10th overall pick. This is going to allow them to get another potential starter for their 2016-17 team. As of right now, they could either take linebacker/defensive end Shaq Lawson from Clemson, running back Ezekiel Elliott from Ohio State, or one of the many top offensive linemen that will be available. If the Giants can finish the offseason strong and avoid injuries, they can go from one of the worst teams in the league to a playoff team and debatably one of the best teams in the league for the 2016-2017 season. Will Big Blue make a comeback and be the Giants that we have seen in the past? Only time will tell.