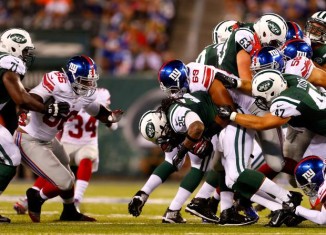 The New York Jets’ season was put to an end on a bitter note by the Buffalo Bills, who were coached by former Jets coach Rex Ryan. The Jets had their ups and downs this season…a ruthless defensive line continued to wreak havoc on opposing quarterbacks with 39 total sacks and 100 quarterback hurries, and 2015 offseason acquisition Brandon Marshall teamed up with Eric Decker to form one of the most formidable receiving tandems in the NFL. There was the Geno Smith and IK Enemkpali punch-gate, which in turn led to the resurgence of journeyman Ryan Fitzpatrick. Todd Bowles decided to move Calvin Pryor back to his natural position at strong safety and, boy, did it pay off. Pryor laid hit after hit on opposing wideouts leaving them fearful to run towards his side of the field again. Marcus Williams proved he was worthy of a starting spot in the secondary by providing a spark with his 6 interceptions.  Obviously, all of these pros come with their cons. Antonio Cromartie was underwhelming in his return to Gang Green. Fans were anticipating one of the most unbeatable and premier secondaries, but were left with one of the more pedestrian and unexciting secondaries instead. Cromartie had no interceptions and 26 total tackles, which was his lowest amount of tackles since his rookie year in San Diego. Linebacker/Defensive End Quinton Coples was so disappointing and made little to no impact this past season that General Manager Mike Maccagnan felt the need to release Coples mid-season. It is important that the Jets have a strong showing this offseason in order to keep the momentum going in the right direction and to hopefully drive the team back into the playoffs next season, ending the 5 season drought of no football in January.

We are taking the reins from Mike Maccagnan for this offseason to hopefully provide the Jets with the additions they need to propel the team into the playoffs next season. Let’s just hope they listen to us!

The first official day of free agency began March 9th, and the Jets wasted no time in finding a replacement for running back Chris Ivory. Ivory landed a 5 year/$32.5 million deal with the Jacksonville Jaguars. Hours later, the Jets signed running back Matt Forte to a deal worth 3 years/$12 million. The Jets also picked up former Saints running back Khiry Robinson, but the terms to that deal have yet to be disclosed. In our eyes, Forte is an upgrade when compared to Ivory. He may not be as violent of a runner as Ivory, but he is a better pass-game contributor and brings a veteran presence to the Jets locker room. The newly renovated Jets backfield may lack speed, but they have a ton of versatility to work with. We believe that the Jets must make more unflashy, under-the-radar signings to keep heading in the right direction.

Many people have been speculating a Muhammad Wilkerson tag-and-trade, which means the Jets would franchise tag Mo Wilkerson (which they’ve already done) and then trade him to another team that has the cap space to potentially sign him to a long term deal. We don’t believe this is a possibility anymore because of the loss of nose tackle Damon “Snacks” Harrison. Harrison landed a 5 year/$46.25 million deal with the hometown rival New York Giants.So, let’s start making some changes!

After signing Wilkerson to his 1 year/$15.7 million deal under the franchise tag, we are left with a total of about $6.9 million of total spending money.

Cuts: In the coming days the Jets will cut all of the following players…

These cuts leave us with a total of $12.2 million dollars saved.

We need more money to be effective in free agency, which is why we ask two of our veterans to take a pay cut in order to get us, and them, closer to winning a Super Bowl.

C Nick Mangold – Nick Mangold agrees to convert $4.6 million of his 2016 base salary and a $2.4 million roster bonus into a signing bonus, while adding a 3rd year to his contract worth $6 million. The money in the 2016 and 2017 seasons is fully guaranteed. This saves us $5 million towards the cap hit.

LT D’Brickashaw Ferguson – D’ Brick agrees to convert $7.5 million of his 2016 base salary and a $1 million 2016 roster bonus into a signing bonus. This also saves us $5 million towards the cap.

This leaves our spending money at 29.1 million dollars.

(All contract values were cited from Overthecap.com)

Resign FitzMagic: Ryan Fitzpatrick revived his career with the Jets and set the Jets record for most passing touchdowns in a season. We remain steady and keep holding out with Fitz. He will soon realize that if he wants to win a Super Bowl, New York is where it will happen. We are generous and give Fitz a 2 year/$20 million deal that counts as a $10 million cap hit in 2016.

(Guard) Geoff Schwartz– Schwartz has been labeled as injury prone the past two years, but Willie Colon and James Carpenter were both labeled injury prone before coming to the Jets. We cut Brian Winters earlier, which leaves us with Brent Qvale, Jarvis Harrison, and Dakota Dozier. All three of those men are 24 years old. Geoff Schwartz is 29, so he does bring an older presence to the locker room, and he would be able to mentor the younger guards. Schwartz is a good buy because when healthy, he can be one of the best guards in the league. We decide to give Schwartz a 2 year/$2.5 million contract. Schwartz’s contract has incentives based on playing time and his health status.

(Tight End) Scott Chandler– Chandler knows the offense well from his time spent in Buffalo when Gailey was the head coach there. He could come in and be the starter from day 1, and he definitely brings a veteran presence to the locker room. Wouldn’t you just love to see Chandler explode for 100 yards and 2 touchdowns against his former team, the New England Patriots? We give Chandler a 2 year/$3 million contract. Chandler’s contract will have statistic based bonuses.

(Linebacker) Sam Acho– There aren’t many quality starting pass rushers on the free agent market, and if there are, they most likely have struck a deal way out of our price range. But, that’s where Acho comes in…Acho spent two years with the Arizona Cardinals, and he racked up 11 sacks in that time. He can only add depth to our already lengthy list of pass rushers. We sign him to a low risk 2 year/$1 million contract with added incentives.

(Linebacker) Shea McClellin– Shea McClellin had a very solid year for the Chicago Bears this season. He has great coverage skills which our linebacking corps desperately needs. He would be able to start at the inside linebacker spot opposite David Harris. We decided to give McClellin a 2 year/$4 million deal loaded with bonuses.

We spent very little this season, which leaves us with around $20-25 million left over for in season signings and rookie deals. This extra money can also count towards next year’s cap or towards locking up Wilkerson with a long term contract.

Round 1: We select Andrew Billings, Defensive Tackle from the Baylor Bears. Billings accounted for 39 total tackles; 14 were for a loss of yards. Billings also contributed 5.5 sacks in 2015. Scouts are saying that Billings is a rare interior lineman who has a combination of power and burst. He is quick on his feet and has the speed to make tackles outside of his designated gap. Since we didn’t replace the hole left by Damon Harrison leaving, we decide to grab Billings here to help bolster our already strong defensive line.

Round 2: We select Germain Ifedi, Offensive Tackle from Texas A&M. Cutting Breno Giacomini earlier left a gaping hole at the right tackle position. We take Ifedi here to fill that hole. He played very well this season, opening holes in the ground game, while also being very reliable in pass protection. He has extreme athleticism and great strength. Scouts are saying that they believe Ifedi can easily become a Pro Bowl caliber right tackle in the NFL, and we believe he can thrive in our offensive system.

Round 3: Deiondre’ Hall, Cornerback from Northern Iowa is taken with the Jets’ third rounder. We need someone to compete with Marcus Williams for the number two job opposite Darrelle Revis. Hall has great size to be an NFL starting cornerback and flourished at the Senior Bowl. He is physical and has great length. He stood out at Northern Iowa and proved to be a ball-hawk with 6 interceptions in 2015. We believe that this is the steal of the draft and Hall can easily be the next Richard Sherman. He has the tools and will be able to receive mentoring from one of the greatest in the game, Darrelle Revis.

Round 4: Kenyan Drake, Running Back from Alabama is selected with our 4th rounder. Drake would be the starter at most schools, but was stuck behind Derrick Henry. Still, Drake managed to amass 5.4 yards per carry for 407 yards and one touchdown. Drake has great speed and acceleration and is able to be elusive between the tackles. He didn’t have many carries in college. But, we feel that he could complement Matt Forte as a change of pace back. We feel that he could come in for us and catch the defense off guard by kicking it out of the outside and just making it around the edge before turning up field and taking it to the house for a touchdown.

Round 5: Kevin Hogan, Quarterback from Stanford University. Hogan is tough and always finds a way to create a play. His teammates and coaches trust him to make the smart decision. Hogan has the NFL size that most teams look for in a quarterback. He definitely benefits from playing in a pro­-style offense. He has average speed and will pull the ball down and gain those tough yards needed to extend a drive. He has won a ton of games as the starter at Stanford, finishing his career with a 36-10 record.

Round 6: Cayleb Jones, Wide Receiver from University of Arizona. Jones is 6’3 and 215 pounds. He caught 73 passes for 1,019 yards and nine touchdowns in 2014, but his numbers dipped a bit in 2015 to 55 receptions for 904 yards and 5 touchdowns. He has great size and extremely long arms. He is also very fluid in and out of his routes. This combination of size and fluidity is something that Chan Gailey loves to have in his receivers. Scouts are skeptic about his straight-line speed though. They also feel that he does not take full advantage of his height, but all of these problems can easily be fixed by coaching and training.

Round 7: Drew Kaser, Punter from Texas A&M University. Let’s be honest…the Jets stunk on special teams this year. Players were out of position, played with a lack of inspiration, and simply didn’t know what they were supposed to be doing. Our punter, Ryan Quigley, was released on March 10th. Quigley was one of the worst in the league. Game after game, he blew punt after punt and gave the opposition great field position. In the heartbreaking loss to the Bills, Quigley punted a ball 21 yards…21 YARDS!!! It’s time that we turn our special teams unit around and get us back to the top. We start by taking Drew Kaser who punted a ball 76 yards in a game against Rice. Now, I don’t know about you, but I think that a leg that strong would have teams pinned inside the ten at the start of every drive.