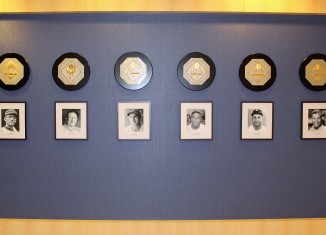 As we approach the end of the 2016 MLB season, it’s time to start considering MVP candidates. The most valuable player (MVP) award is given to the best player in the National and American League, therefore there are two MVPs. In past years, the National League MVP award has been given to Bryce Harper, Clayton Kershaw, and Andrew McCutchen. Recent MVP award winners from the American League have been Josh Donaldson, Mike Trout, and Miguel Cabrera. Overall, this award is very prestigious and is most certainly a big deal for baseball players and fans.

The National League is full of great players; however, only a select few are truly worthy of MVP consideration. One of these players is the second baseman for the Washington Nationals, Daniel Murphy. Murphy has proven to be a great addition to the Nationals this season, helping to propel them to the top of their division. Murphy’s stats this season make it clear to see why he is a contender for this coveted award. He has a batting average of .341, which is the third highest in all of baseball. He also has 98 RBI’s, which is fifth most in the league. With 25 home runs so far, he is already beating his total from last season by eleven. Murphy is having an outstanding season to say the least. Another player who has made a big splash this season is the third baseman for the Chicago Cubs, Kris Bryant. Bryant has been an integral part of the Cubs being favored to win the 2016 World Series. Bryant leads the MLB in runs at 111 and has the second most home runs at 36. Bryant has also shown his versatility in the field this year, playing at six different positions throughout the season. Clearly, Kris Bryant is a strong candidate for NL MVP. However, only one of these players can win MVP. In my opinion, it will be Kris Bryant because his flexibility to play more than one set position really separates him from the other candidates and strengthens his case for the award.

One of the favorites for the American League MVP award is the second baseman for the Houston Astros, Jose Altuve. Jose Altuve is the leader for an up and coming Astros team and is one of the main reasons that they are still in the playoff hunt. Altuve leads the league in batting with a very impressive average of .351. He also leads the league in hits with 184. Altuve is second among league leaders for total bases. Clearly, the stats back Altuve’s potential and prove that his case for AL MVP is a serious one. Another candidate for AL MVP is last year’s winner, Josh Donaldson. Donaldson is is the third baseman for the Toronto Blue Jays. Donaldson is making a strong case for back to back MVP awards. He has helped lead the Blue Jays to a successful season that will likely have them in the playoffs. Donaldson is second in the league in runs at 106. He also has an outstanding slugging percentage at .579 and a great on-base plus slugging percentage at .986, ranking Donaldson in the top five in both of these categories. Although both of these players have had great seasons, only one can win the MVP award. I personally feel that the AL MVP will be Jose Altuve because of the fact that he has almost single- handedly kept the Astros in the playoff hunt.

As this year’s MLB season is rapidly coming to a close, only time will tell who walks away with the title of MVP this year. There are multiple players with a lot of potential, but only two people can be named MVP of the MLB. So, for now, we wonder…who will it be?