You are here
Home > Sports > The MLB Playoffs: A Summary 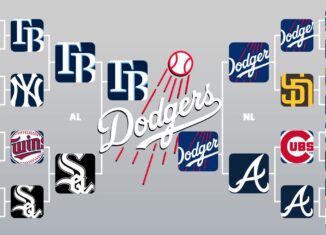 In the 2020 MLB playoffs, there were some big surprises, but most of the best teams still came out on top.

In the Wild Card, there were some crazy moments, such as Gio Urshela’s grand slam and the Astros showing that they can still win despite their cheating controversy. The Rays, with one of the best records in the league, cruised by the Blue Jays with no trouble. Although the score of the series may not show it, the Indians put up a solid fight to the insane starting lineup of the Yankees, fueled by a Gio Urshela grand slam and some late runs to close out the series. The Astros won, proving that they are still a good team, adding to the Twins 18th consecutive playoff loss and the pitching of Lucas Giolito. The young White Sox stars could not help them against a solid A’s Rotation. The Dodgers rolled through the Brewers with the help of 12 strikeouts from Clayton Kershaw. The Marlins upset the Cubs due to the horrible bullpen of the Cubs forcing Kyle Hendricks to stay in the game. One of the best series, however, was the Cardinals vs the Padres, where the young Fernado Tatis Jr. and Manny Machado hit 2 lead-taking home runs in game 2 and held the veteran Cardinals team to a shutout in game 3 to win the series. The near-perfect pitching from Trevor Bauer and Luis Castillo was not enough, as the Reds scored no runs in 22 innings of baseball. In the Astros vs A’s in the ALDS, despite the A’s and Astros combining for 24 home runs (12 each), the A’s were only able to come out with 1 win to lose the series 3-1. The Yankees and Rays had a back and forth series each winning a game to go into game 5 of the series. Gerrit Cole only let up 1 run, but in the 8th inning, Aroldis Chapman gave up a home run that cost the Yankees the series.

In the NLDS, the surprise team Marlins didn’t have a chance against the bats of the Braves, yet they swept a relatively easy series for them led by Travis D’arnaud batting .600 with 7 RBIs. The Dodgers sailed past the young Padres with the help of Cody Bellinger’s wall leaping catch and the red hot Corey Seager. The Padres can be a much better team next year with some arms around that offense. In the ALCS, the Rays won 3 relatively close games to jump out to an early 3-0 lead by some amazing defensive plays and pitching. The Astros were almost written off as a loss, but after winning game 4, Carlos Corea hit a walk-off home run in game 5 to leave Rays fans a little nervous. Coming this close, the Astros forced a game 7, but after a few near rally innings, the Astros lost game 7 and the outstanding Randy Arozarena won the MVP with 4 home runs.

On the other side, in the NLCS, there was an exciting series with the Braves and Dodgers. The Braves took a 3-1 lead against the Dodgers with Ozzie Albies nice performance, but it was too close to call it shut. The Dodgers powered back, led by the absurd hitting performance by Corey Seager, to force a game 7. This game could have been the best all postseason back and forth with plays at the plate and an effortless game-changing rob by Mookie Betts. In a tie game in the bottom of the 7th, Cody Bellinger hit a lead taking a home run to make the score 4-3. The Dodgers were able to close out the game and advance to their 3rd World Series in 4 years. Corey Seager won the NLCS MVP hitting 5 home runs with a .310 BA. Where we stand now is with a World Series with the Rays and the Dodgers that is sure to be close.