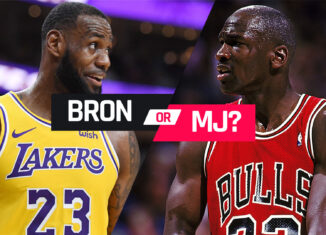 The debate on who is the best NBA player of all time is one that will never fade and will, therefore, always be a topic of discussion among fans of the NBA. While many people believe Michael Jordan is the Greatest of All Time, others disagree and believe the GOAT is, without a doubt, Lebron James.

While debating, many different statistics for each player are essential to bringing up when trying to persuade the opposition. When comparing these two amazing players, Michael Jordan has won six Championship rings in six finals appearances with the Bulls, as well as five regular season MVP awards. When looking at Lebron James, including the 2020 “Bubble” Championship win, he now has a total of four championship rings in a total of ten finals appearances, as well as four regular season MVP awards. To dive a bit deeper into the accolades of these two All-Time greats, we can also bring up the fact that while Michael has won the scoring title a whopping ten times in his fifteen-year career, Lebron James has only accomplished this feat one time in his seventeen-year career.

Another side of the story shows that Lebron, going into his 18th year in the NBA, has just about 2,000 more points, around 3,000 more rebounds, and just under 4,000 more assists in his career than Jordan. Although Lebron has played several more full-length seasons than Jordan, these comparisons still show the greatness of Lebron James and his ability to not just score, but also to facilitate the ball to his players and grab rebounds in an effort to gain more possessions and opportunities for his team each and every game. Although offense is a huge part of basketball, defensive skills and abilities are just as useful and important when trying to be as successful as you can be as a player. When turning it over to the defensive stats for each respective player, we can clearly see that Michael Jordan, who was placed on the All-Defensive first team a total of nine times, was a much better defender than Lebron, who has only been a part of this “team” five times in a long career.

To list out all of the accolades and comparisons between these two players, it would require a lot of time and research, but for now, we can look at these statistics and make a decision on who we believe to be the so-called “G.O.A.T”. While Lebron still has more time to prove himself in his career, his past failures in the biggest moments make it clear that Michael Jordan should be considered the greatest NBA player of all time.