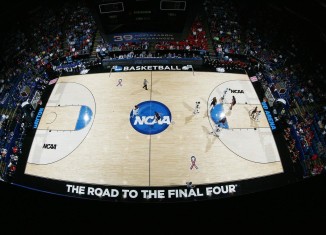 The NCAA tournament is one of the most exciting events in sports. It’s a college basketball tournament filled with 68 teams, all vying for a spot in the coveted Final 4. The way it works is there are 4 different brackets filled with 16 teams, all ranked from best to worst. Eventually, there’s only one team left from each bracket, and those teams make the Final 4. Once the teams reach the Final 4, they play a semi final game and then a final game to see which school comes out on top. This team is crowned the champion. The reason the NCAA tournament is so special is because of the craziness that takes place within the tournament. Each year, you can count on buzzer beaters, upsets, and tears from the tournament. Let’s take a

moment to review a couple of teams that have a strong chance to win the whole thing this year, and see if these predictions can actually come true and bring home the coveted NCAA championship trophy.

One team that should most certainly be a favorite to win the tournament is the Kansas Jayhawks. Kansas is a storied program that you can count on to be in the mix to win the title every season. Kansas is coached by Bill Self, one of the best coaches in the game. Coach Self has already won a championship, so he understands what needs to be done in order for this year’s team to accomplish what his team in 2008 team did, which was win it all. Kansas also has great talent. Their best player is Perry Ellis. Ellis is a senior with a lot of experience. Ellis has had an outstanding season. He is nominated for the Wooden Award, which is given to the best player in college basketball. Even though he’s not likely to win it, it’s still a big honor and shows that he’s a great player. Kansas also has great guard play. They are led by two junior guards, Frank Mason III and Wayne Selden Jr.. Both these guards combine to average about 27 points and 7 assists per game. Kansas is also ranked #1 in the country because they have been so impressive in the regular season. They are going to be the regular season champions of the Big 12, which is arguably the strongest conference in college basketball. Overall, Kansas has proven that they should be a team that people fear in the tournament.

Another team that definitely deserves to be a favorite to win the NCAA tournament is the Michigan State Spartans. The Spartans are coached by the great Tom Izzo. Izzo has already guided the Spartans to 7 Final 4 spots, including his magical run to the Final 4 last year. Izzo clearly knows what it takes and has the experience to get it done. The Spartans also have possibly the best player in the country in Denzel Valentine. Not only is Denzel nominated for the Wooden Award, but if not for Buddy Hield, Denzel would likely be the favorite to win the award. Valentine is averaging almost 20 points and 7.5 rebounds and assists per game, which are ridiculous numbers. Valentine is also a senior who has already led a team to the Final 4. He has the experience and leadership to get his team a national championship. Michigan State also has the ability to shoot from 3-point range. Not only is Denzel a great shooter, but the Spartans have Bryn Forbes. Forbes is averaging 15 points and shooting 50% from the 3-point line. Most recently, Forbes dropped 11 threes and had 33 points against Rutgers. Another reason the Spartans have such a good shot to win the tournament is that they have great chemistry. Earlier in the season, Denzel Valentine missed a few weeks with an injury. Even though it cost them a few games, their team became even closer and new leaders emerged. Michigan State was able to find other players that they could go to at the end of the game such as Matt Costello and Deyonta Davis. Overall, the Spartans have a great chance to win the tournament.

Despite strong starts and equally as strong seasons, neither of these teams found their way to the Final 4. The first Final 4 game saw the Sooners from Oklahoma face off against the Villanova Wildcats. Both teams gave it their all, but Lon Kruger and his talented Sooners were no match for Jay Wright’s Wildcats, as Villanova stole this game with a 95-51 victory over Oklahoma. Similarly, UNC was able to breeze past Syracuse, despite Syracuse making a strong effort. As the second game of the Final 4 came to a close, fans were left with UNC defeating Syracuse by a score of 83-66.

With the norm for this tournament being weeks of upsets and surprises, only time can tell who will come out on top and be named each year’s college basketball champion. This year’s tournament was no exception. Brackets were shattered

and history was made leaving fans with a championship battle between UNC and Villanova. And that battle did not disappoint. As this year’s tournament came to a close, a very worthy victor emerged in the Villanova Wildcats. Defeating UNC with a buzzer-beater score of 77-74, the Wildcats, led by coach Jay Wright, found themselves in a place they hadn’t been in over 30 years – center court hoisting an NCAA championship trophy.