You are here
Home > Sports > The New and Improved Denver Nuggets 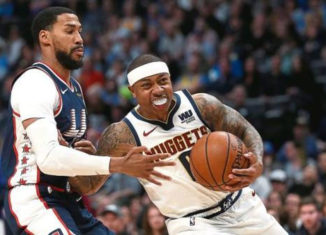 Every year in every sport, there is at least one surprise team. Whether it is a good or bad surprise, we are always uncertain of what the future holds for them. For example, this year, the NFL had a surprise team in the Chicago Bears. The Bears haven’t done much since they won the Super Bowl in 1985. This year, their defense was one of the best, if not the best, in the NFL. The defense led them from a 5-11 season to a 12-4 season. Similarly, this year, the NBA has a surprise team: the Denver Nuggets.

The Nuggets played well last season. After years of rebuilding, it seemed that they were finally a playoff team. However, the top seven teams in the West were just much better than Denver. On April 11, 2018, the Nuggets played against the Minnesota Timberwolves. The winner of this game would face off against the high-powered offense of the Houston Rockets as the eighth seed in the playoffs. This game was close throughout, until the Nuggets lost in overtime. Since then, the Nuggets have looked for ways to improve.

The Denver Nuggets have always been an unpopular team. Their best all-time players, named Alex English, David Thompson, Carmelo Anthony, and many more, were overlooked during their careers. The Nuggets started to get more recognition when they drafted Small Forward Michael Porter Jr. with the 14th overall pick in this year’s NBA Draft. MPJ was well known in high school as he was a five-star recruit and the 2nd highest rated player on the ESPN Top 100 in 2017. MPJ agreed to play for Missouri, which puzzled many as he didn’t go to a famous basketball school like Duke. His attempt at becoming a legend at Missouri would never come as he got a back injury after just playing three games of college hoops. MPJ is still dealing with the injury and will likely be back for next season.

Without MPJ, the Nuggets have done much better than expected. The Nuggets currently have the 2nd best record in the Western Conference, and the 4th best record in the NBA. The Nuggets have done very well on both offense and defense this season. They are very well-rounded and led by 23 year old Center, Nikola Jokic. Jokic is considered one of the best big men in the league. He is not only a great rebounder, but also a great shooter, as he can shoot mid-range and from deep. The Nuggets backcourt also has a lot of talent. Their Point Guard, Jamal Murray, is a great playmaker, and their Shooting Guard, Gary Harris, is a solid shooter. The Nuggets also have 4-time all-star (2014-2017) Power Forward Paul Millsap. Millsap no longer has all-star potential, however, as he has gotten worse with age. At 33 years old, Millsap is mentoring the team for an even better future, especially with MPJ looking at a healthy 2019-2020 season.

If the Nuggets continue to go down this path, they have a shot at making the Western Conference Finals. However, it is highly unlikely that they will advance to the NBA Finals as they would most likely have to face the Golden State Warriors, who are considered, arguably, the best team of all-time. In the coming years, the Warriors dynasty will hopefully end, and there will be a new king of the western conference. That king might be the Denver Nuggets.

The Nuggets’ Isaiah Thomas drives against the Clippers’ Garrett Temple in the fourth quarter of Sunday’s game at Pepsi Center in Denver. Photo courtesy of: (Matthew Stockman / Getty Images)