You are here
Home > Sports > The NHL Season Finally Begins 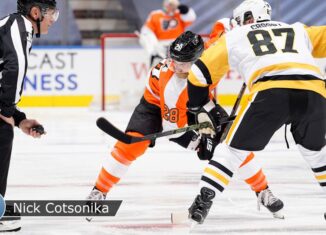 Due to the Covid-19 pandemic, not all teams are allowing fans at their games, but they will all be televised in some capacity to allow fans to enjoy the sport they love. Out of the 31 NHL teams, only seven are allowing fans. The Arizona Coyotes are allowed 25% capacity, The Dallas stars are allowed 30% capacity, The Florida Panthers are allowed 25% capacity, the Nashville Predators are allowed 15% capacity, and the St. Louis Blues are allowed 7.6% capacity. Beginning this week, both the New York Islanders and the New York Rangers will have a limited number of fans in their arenas as well with strict Covid protocols. The NHL and Adidas also released new jerseys this year called Reverse Retro Jerseys. Retro Jerseys are an old jersey that each team picked with the colors reversed. This season, the NHL also inserted ads onto each team’s helmets. The ads on each helmet help bring money to the NHL after the loss it suffered during the Covid-19 pandemic.

As of February 2nd, 2021, the best three teams in the NHL are the Toronto Maple Leafs, Philadelphia Flyers, and the Washington Capitals. This can easily change as there are NHL games played every day of the week, and there’s still a lot of hockey to be played!