You are here
Home > Sports > NY Giants: An Inclusive Update 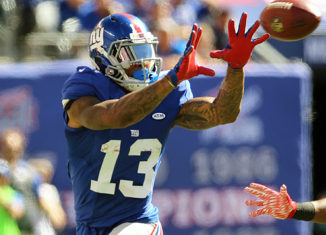 By Justin Tisch / By Jimmy Rouse

The New York Giants have started the 2016-2017 football season off 2-3. Even though the Giants are below .500, they are still a team that can make it to the playoffs. However, with the NFC East doing better than it has been in years, there is a question in the minds of all Giants fans: Can the New York Giants win the NFC East?

This is not as simple of a question as most people make it out to be. There are a lot of variables that have to be discussed such as the other teams in the division, injuries, the strength of schedule, and how well the team has been performing so far.

To start, the Giants are last in the division as they are the only team in their division that is under .500. The NFC East is the only division in the NFL to have 3 of the 4 teams in their division an above .500 record. The Cowboys look like a team that can easily make it to the playoffs. They won their last four games after losing the season opener to the Giants. The Dak Prescott and Ezekiel Elliott combo has looked phenomenal as Dak still has not thrown an interception 5 games into the season, and Elliot continues to live up to the preseason hype. However, Tony Romo is expected to play his first regular season game since November 26, 2015. To some people, this may seem like it should benefit the Cowboys; however, since the Cowboys have been playing so well with Dak, this move can hurt the chemistry of the team and potentially ruin the Dallas Cowboys’ season. The Eagles are another team in the NFC East that has been playing extremely well. Led by rookie Carson Wentz, the Eagles have a +64 in point differential this season which is the best in the NFL. The Eagles defense has been one of the big surprises of this season as they only allowed three points to a far more superior Pittsburgh offense. However, besides Pittsburgh, the Eagles have not played any other tough teams and will be challenged a lot late in the season. They still have to play all of their divisional games as well as other tough opponents, including Seattle and Green Bay. The last team in the NFC East is the Washington Redskins. Even without a great quarterback, Washington has found ways to put points on the board and win games. Washington has one of the deepest wide receiver cores in the NFL, and it shows in the stats. The Redskins have four different receivers with over 200 yards. On the other side of the ball, the Redskins acquired Josh Norman who is one of the premier cornerbacks in the NFL. With that said, the Redskins are still a team that is vulnerable because of their tough upcoming schedule and because they let up a good amount of points on defense. The Giants are going to have their work cut out for them if this trend continues throughout the season.

In addition to finding themselves in a tough division this year, the New York Giants is one of a handful of teams that has had to deal with injuries. Offensively, the Giants have lost both of their running backs to injuries. Shane Vereen tore his tricep in week 3 and was placed on the IR. However, given that Vereen has a good record for recovery, he could make a late season return. The Giants also had their starting running back Rashad Jennings injured since week 2 with a thumb injury. He can potentially make his return for week 6, which would be a big addition for a Giants offense that has not been able to get their run game going. Another offensive player that has been injured for the Giants is Marshall Newhouse. Newhouse has yet to make an appearance in the 2016-17 regular season because of a concussion; however, he is expected to make a return within the next few weeks. On the other side of the ball, the Giants have had a banged up secondary. Eli Apple has been dealing with a hamstring injury that cost him to miss a few games so far, and Dominique Rodgers Cromartie has sustained multiple injuries causing him to miss a couple of games as well. As if all of this wasn’t enough of a blow, he Giants have had both of their safeties out for the last few games which has caused their secondary to be extremely weak and vulnerable. If the Giants can keep their starters on the field for the rest of this season, you can expect good things to come; however, if they continue to have to deal with injuries, the Giants will struggle a lot.

So far, fans have seen both good and bad from the Giants. During their first two weeks, the defense was playing very well, limiting Ezekiel Elliott to only 51 yards rushing on 20 carries in week 1 and shutting down one of the most explosive passing offenses in the league by only giving up 13 points. However, in the next three weeks, the Giants defense was not nearly as good as they let up at least 20 points in each game. On top of this, the Giants offense has not been able to get started. They only average 17.8 points a game this year after scoring 26.3 last year.

And, to top it all off, the Giants have a moderately difficult schedule the rest of the season. They play a few difficult games, such as week 10 versus the Bengals and week 13 at the Steelers. They also get to play a couple of easy games, like week 11 versus the Bears and week 12 at the Browns. If the Giants can win some of their harder games as well as not letting the easier teams they play upset them, the New York Giants can end the season above .500 and potentially sneak into the playoffs.

Ultimately, I do not think that the Giants can win the NFC East because of the injuries that they have sustained throughout the year, the poor offensive performance, and the very tough division. The New York Giants still do have a chance of making it to the playoffs as a wildcard team, but they still need to improve their game to help make that happen.

The 2015 season was a tough one for the Giants. They finished with an overall record of 6-10 and failed to make the playoffs despite the efforts of star players Eli Manning and Odell Beckham, Jr. Eli finished with 4,432 yards and 35 touchdowns, and OBJ hauled in 96 passes for a total of 1,450 yards. However, their defense struggled under Steve Spagnuolo and finished dead last in total yards and passing yards allowed. The Giants are revamped on both the offensive and defensive side of the ball for this season, so there is hope.

For starters, the defense hopes to turn things around this year. During the offseason, they acquired players such as Janoris Jenkins, Olivier Vernon, and Damon Harrison. Janoris Jenkins was acquired from the Rams last season, and after four weeks, he has already caught two interceptions. Olivier Vernon and Damon Harrison make up half of the Giants defensive line now. Vernon should have a significant impact, as he was able to record 11.5 cialis 20mg pas cher paris sacks in just his second year. The Giants also acquired Eli Apple, a cornerback from Ohio State, in the first round of the draft this year. However, the Giants new defensive look isn’t just from their new additions. While Jason Pierre-Paul played just half of last season due to a fireworks injury and recorded an abysmal 1.0 sack last year after recording 12.5 sacks in 2014, he is wearing a regular glove now and looks to get back into the swing of things with the Giants this year. Lastly, Dominique Rodgers-Cromartie will look to step it up this season after playing just 4 games last year. The defense should be able to contribute more to the team this season.

Although the Giants had a solid offense last year, they have improved even more this year and look to be one of the top offenses in the league. Odell and Eli look to keep up their connection this year as they connected with each other almost 100 times last year for almost 1,500 yards. However, Eli will have even more targets to throw to this year. Victor Cruz tore a muscle in his calf that caused him to miss the entire 2015 season. In the two seasons where Cruz played all 16 games, he racked up a total of about 2,500 yards. Cruz is certainly an explosive talent and having him back in the lineup for the Giants this year should be a very good thing for them. Eli also has rookie Sterling Shepard from Oklahoma. In his senior year, Shepard scored 11 touchdowns to go along with 1,288 yards. This year, Shepard has been the Giants most consistent receiver through 5 games with 2 touchdowns and 277 yards. Lastly, the Giants look to improve their rushing game even more. Last year, they relied heavily on Rashad Jennings, but this year, they have been relying on Orleans Darkwa and Shane Vereen even more.

The Giants started off strong this season with wins against the Saints and the Cowboys, but they have since lost three straight against the Packers, Redskins, and Vikings. All of these teams, however, are very good teams, and with the new leadership of Ben Mcadoo, the Giants can surely turn their season around.  The Giants have a good shot at making the playoffs this year.