You are here
Home > Sports > Sarah Fuller is Making History in College Football: The First Female to Play in a Power 5 NCAA Football Game 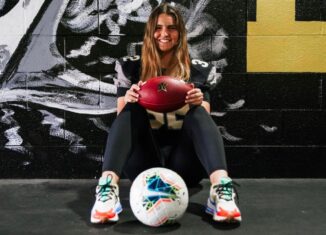 Over Thanksgiving weekend, history was made in the world of college football. Sarah Fuller, a member of Vanderbilt University’s women’s soccer team, became the first woman to play in a Power 5 collegiate football game. Katie Hnida (New Mexico) and April Gross (Kent State) were the first two women to participate in college football games, but Fuller was the first in a Power 5 conference. The men’s football team was in need of a kicker due to players being out because of Covid, so they looked towards Fuller, the talented soccer player. Sarah’s participation in Vanderbilt’s football game breaks stereotypical barriers that “football is only for boys” and is inspiring to young children who look up to athletes like her.

Sarah’s important role was shared and appreciated by many fans, athletes, and celebrities on social media. Other famous athletes, including female athletes and NFL players, gave her shoutouts and showed their respect for her inspirational performance. Sarah had support from not only the Vanderbilt community but also from people all over the world. To build onto Fuller’s motivating story, she also has overcome serious injuries from previous years to get to where she is today. Her resilience and determination to overcome her injuries helped to make her stronger. Her helmet worn during the game displayed the words “Play like a girl” in the hope to empower female athletes and spread ideas of equality.

Although she did not get to spend much time on the field due to no extra points or field goals being kicked by Vanderbilt, Sarah overcame past patterns of football being a sport designated for men only. This will continue to inspire and motivate females everywhere to work hard and to follow their dreams. She wants to spread the message that hard work truly pays off and that you can achieve anything you set your mind to.