You are here
Home > Sports > The Strong AL East 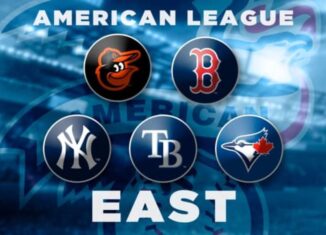 The AL East throughout the year has shown to be one of the best divisions in baseball. In first place is the Tampa Bay Rays who always find a way to win as many games as possible. They may not always have the best stars but they have the ability to drop runs and shut down the opposing offense. Then comes the Boston Red Sox who were one of the best teams in the first half of the season. They failed to acquire enough significant players during the trade deadline to continue their dominance. Although they used to be one of the best teams in baseball in the beginning of the year they still have a shot at the wildl card. Next, the New York Yankees have had its ups and downs this season. They have been out of the playoffs for most of the year but down the stretch have been able to go on winning tear to be in contention. The Yankees are interesting; they are either really hot or really cold, never really a inbetween. Next, the Blue Jays over the past two weeks have been the best offense in baseball. Led by the MVP candidates Vladimir Guerrero Jr. and Marcus Semian with a very strong supporting cast. This past week the Blue Jays have been scary, dropping what seems like 10 runs every single game. If they can make the playoffs with a strong rotation they can easily make it deep. With around 16 games to go the only team that’s a lock is the Rays. The final wild-card spot will be between the Blue Jays, Yankees, and Red Sox. If The Yankees can hit a hot stretch in his final 16 games they can easily squeak in for a wildcard game with Garrett Cole. The Red Sox seem like the worst out of these three teams right now but they are right there with them and can easily get in. The Blue Jays are eight and two in the last 10 games and are the hottest out of three teams. The AL East has shown to be the hardest division in baseball and might have four 90+ win teams.