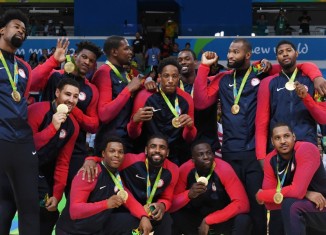 With the 2016 Summer Olympics in the books, it’s time to recap one of the most anticipated events: Men’s Basketball. Ever since the revolutionary “Dream Team,” which introduced USA Basketball to the Olympic games, basketball has been one of the more touted Olympic competitions. Team USA is known for consistently dominating the world when it comes to basketball, so it is no surprise that the roster is stacked with All-NBA talent. This year’s  roster consisted of two Point Guards, Kyrie Irving of the Cleveland Cavaliers and Kyle Lowry of the Toronto Raptors; three Shooting Guards, Jimmy Butler of the Chicago Bulls, Klay Thompson of the Golden State Warriors, and DeMar DeRozan of the Toronto Raptors; five forwards, Kevin Durant of the Golden State Warriors, Harrison Barnes of the Dallas Mavericks, Carmelo Anthony of the New York Knicks, Draymond Green of the Golden State Warriors, and Paul George of the Indiana Pacers; and two centers, Andre Drummond of the Detroit Pistons and DeAndre Jordan of the Los Angeles Clippers.

Expectations were high right from the first tip-off. Critics figured that a team this loaded with superstars should blow away the competition, and no other team realistically stood a chance of competing with Team USA. The competition consists of a group stage followed by a knockout stage. For the group stage, teams were divided into two groups of six countries, playing every team in their group once. Two points were awarded for a victory, one for a loss. The top four teams per group qualified for the quarter-finals.The eight teams that advance to the knockout round are placed in a single elimination bracket, consisting of three rounds. The three rounds include the Quarter-finals (first round), Semi-finals (second round), and Gold Medal (third round). Semi-final losers played for the bronze medal.

In the group stage, Team USA showed why they were the favorites to take home the gold, as they dominated China 119-62, Venezuela 113-69, and Australia 98-88. After the third game against Australia, Team USA began to show its flaws, and this sent shockwaves throughout the sports world. This was the first time that we had truly seen Team USA struggle since the 2004 Summer Olympics. Team USA’s next game versus Serbia was highly anticipated, as fans wanted to see whether or not Team USA would break out of their slump. As halftime approached, Team USA led 50-41. Coming out of the half, there was a sense of urgency for Team USA to finish what they started and ultimately take down Serbia, but Serbia had other plans. Late in the fourth quarter, Team USA lost their lead thanks in part to a second half comeback led by Nikola Jokic of the Denver Nuggets and Dario Saric of the Philadelphia 76ers. With the Gold Medal on the line, Team USA got their minds straight and finished off Serbia. Although they didn’t obliterate their opponent as they did in the previous three games, they edged out Serbia with a 94-91 victory.

Entering the last game of the Group Stage with a 4-0 record, Team USA entered the fifth game ready to finish what they had started. Tensions were flaring prior to the game, with analysts calling out Coach K, in addition to some players, due to the lack of meeting or exceeding expectations. Once again, Team USA entered halftime with a small lead and that small lead was barely enough to fend off yet another fourth quarter comeback bid. Team USA defeated France 100-97 and entered the Knockout Stage with uncertainty because of their poorly played previous games.

The Knockout Round consists of three games (if you advance for all three), and Team USA took care of business in the first game, beating Argentina 105-78. The Semi-final round was met with a small hiccup, as the team barely held on to beat Spain 82-76. The Gold Medal game was one full of excitement, as it was a rematch between Team USA and Serbia. This time, Team USA got serious and man-handled Serbia 96-66, resulting in the third consecutive Gold Medal for USA Men’s Basketball. Overall, Team USA’s lone flaw was put on display during these Olympics: a lack of seriousness. Players on Team USA believed they could come in and coast to a Gold Medal, but nothing that is wanted is simply given; it must be earned. The 2016 Summer Olympics proved how superior USA is in terms of raw basketball skill, but the Olympic games also showed how far the rest of the world has come in terms of these skills. The game of basketball is developing almost everywhere around the world, and it was definitely showcased during the 2016 Rio Summer Olympics.