You are here
Home > Sports > The Art of Bracketology 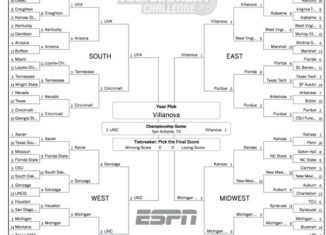 It’s that time of the year again. The time of year when you fill out an NCAA basketball tournament bracket. Whether you know anything about college basketball or not, you will most likely fill out a bracket. Whether your strategy is to pick based on which mascots look the coolest, to pick no upsets at all, or to do research for 24 hours before deciding, the reality is that you will not get a perfect bracket. There are unexpected and unpredictable upsets every year. In fact, the odds of getting a perfect bracket are 1 in 9.2 quintillions. To put this in perspective, you have a better chance of getting struck by lightning, winning the lottery, or even getting hit by a meteor than getting a perfect bracket. Now, I’ll talk about the basketball part. While millions of people are having fun entering in their brackets, there are players on 64 different teams fighting with all their hearts to reach the Final Four, which is in San Antonio, Texas this year. After much research, I present you with my 2018 NCAA basketball tournament bracket.

The only upset that I have for the South Region is Loyola-Chicago knocking off Miami. Miami guard Bruce Brown Jr. is out for the NCAA tournament due to a foot injury, and I have a feeling that the Loyola-Chicago Ramblers will be very hungry because they’re playing in their first tournament game since 1985. Another upset I was considering was Davidson over Kentucky, but John Calipari’s Kentucky team has been red hot, coming off another SEC Championship. I was also considering having Arizona over Virginia, especially because Virginia’s freshman De’Andre Hunter was ruled out for the tournament, but I still believe that Virginia has the best defense in the country, and they can stop Arizona star Deandre Ayton. Virginia’s defense will travel all the way to San Antonio, after they beat Cincinnati, and they will go to the Final Four.

The upsets I have in the East Region are Marshall over Wichita State and Florida over Texas Tech. These are both for similar reasons; based on what I saw this year from Wichita State and Texas Tech, I am not that impressed. I think they are both on major upset alert. The Villanova vs Purdue elite eight matchups will be a fantastic game, but at the end of the day, the Wildcats have too much experience and talent for the Boilermakers to handle. Villanova will head to San Antonio.

I see Ohio State getting upset by San Diego State in the first round in the West Region. There is a 5-12 upset pretty much every year, and I think this is definitely likely to happen. Keita Bates-Diop is really good, but he can’t carry OSU all by himself. Xavier has a lot of experience, with J.P. Macura and Trevon Bluiett, and I went back and forth on this game, but I decided that Gonzaga has a lot to prove, just like last year. They will knock off the 1 seed and meet UNC in a rematch from last year’s championship game, given that UNC will beat a hot Michigan team. Joel Berry will lead North Carolina to its third straight Final Four appearance and will try to lead the Tar Heels to their second championship in a row.

The Midwest Region consists of my Cinderella team this year: the New Mexico State Aggies. I have the 12-seeded Aggies beating Clemson and then knocking off Auburn in the second round. Senior Zach Lofton averages almost 20 points per game, and senior Jemerrio Jones averages more than 13 rebounds per game. I’d say if anyone can have a Cinderella story this year, it can be the Aggies of New Mexico State. However, the clock will strike midnight when they play Kansas in the Sweet 16. Michigan State and Duke both have loads of talent, but I have faith that Miles Bridges will come through in the clutch and pull out the win for the Spartans. Although Kansas has won 14 straight Big 12 titles, they haven’t had the same sort of success in the tournament. That will continue as they will lose to MSU, and the Spartans will head to San Antonio.

Virginia has beaten UNC twice this season already, but I believe strongly that the Tar Heels are a much different team when the calendar turns to March. North Carolina will defend Kyle Guy and the 3-pointer better, especially with De’Andre Hunter out, and they will go to their 3rd straight championship game. When it comes down to Villanova playing against Michigan State and then UNC, I think of one factor: experience vs talent. However, I feel strongly that Michigan State has the most talent out of the 3 teams, and UNC has a lot of experience. So, why am I choosing Villanova? They have a ton of both. Between the talent and experience of Jalen Brunson, Donte DiVincenzo, and Eric Paschall, and the top-10 projected NBA pick in Mikal Bridges, makes the Wildcats a nightmare for teams to play against. Villanova will win the championship rematch from 2016, although I highly doubt it will be nearly as good an ending as that classic.