You are here
Home > Sports > The Long Awaited Return of March Madness: Upsets Galore and Baylor Bears on Top 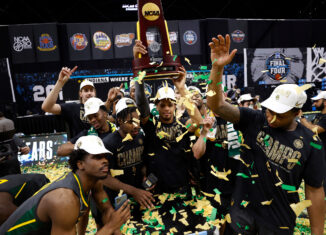 When the world first flipped upside down in March of 2020, one of the first things taken away from us was the beloved NCAA basketball tournament, March Madness. The cancellation of this annual event was devastating to sports fans across the nation. When March of 2021 came around, the anticipation for March Madness was greater than ever. Sports fanatic or not, people can bond over the excitement and fun of filling out their yearly brackets. The “madness” in March Madness was greater than ever. With many upsets, buzzer beater wins, and high scoring games, this year’s exciting tournament made up for the one we lost last year.

In the first round of 64, there were many shocking and wild moments and games. The most shocking and notable first round upsets included 15 seed Oral Roberts over 2 seed Ohio State, 12 seed Oregon State over 5 seed Tennessee, 13 seed North Texas over 4 seed Purdue, 10 seed Rutgers (their first tournament win since 1983) over 7 seed Clemson, 11 seed Syracuse over 6 seed San Diego State, 13 seed Ohio beating 4 seed UVA, 10 seed Maryland defeating 7 seed Connecticut, 11 seed UCLA over 6 seed BYU, and lastly 14 seed Abilene-Christian victorious over 3 seed Texas in the last 1.2 seconds of the game.

The Sweet 16 was a continuation of more eventful matchups. More upsets were 12 seed Oregon state over 8 seed Loyola-Chicago, and 11 seed UCLA defeating 2 seed Alabama in a chaotic overtime. The results of these games left Oregon State vs. Houston, Arkansas vs. Baylor, USC vs. Gonzaga, and UCLA vs. Michigan as the remaining elite eight teams competing for the final four sports.

The final four was 2 seed Houston vs. 1 seed Baylor and, surprisingly, 11 seed UCLA vs. 1 seed Gonzaga. Baylor crushed Houston 78-59, and Gonzaga beat UCLA in an unbelievable 3 pointer at the buzzer-beater by Jalen Suggs, ending the game at 93-90. The final matchup was set: Baylor vs. Gonzaga. Gonzaga was undefeated all season but fell short in the championship against Baylor, where Baylor was victorious over Gonzaga with a score of 86-70. This year’s March Madness was surely memorable and included many moments of true madness.