You are here
Home > Sports > The Snowboarding Legend: Shaun White 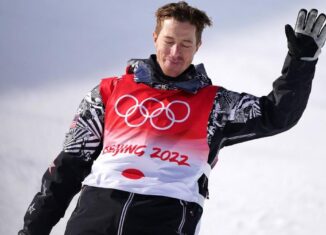 The 2022 Winter Olympics in Beijing, China is now in session, and many great American athletes are strong contenders for medals. This year’s Winter Olympics runs from February 4th to February 20th. One of the most popular sports featured in these games is snowboarding. There are currently 11 different snowboarding events, such as Slopestyle, Parallel Giant Slalom, Snowboard Cross, Big Air, and Halfpipe. These events are held for women and men, and one mixed team event for Snowboard Cross.

When you think of the king of snowboarding, most people will think of Shaun White, an American snowboarder best known for halfpipe events. He is a five-time Olympian and three-time Olympic gold medalist, the first snowboarder in Winter Olympics history to win three gold medals. Not to mention, he holds the world record for the most X games gold medals (18). He is currently 35 years old and just finished his last Olympic games, ending off his fulfilling snowboarding career. Unfortunately, he did not place high enough to win a medal, but that is not important. What is important is his legacy that he left behind. He started snowboarding when he was only six years old and won his first local snowboarding competition he entered in at age eight. His tricks and techniques as a youngster were even better than some of the frequent older pros at his mountain. As he got older into his teenage years, he was selected to compete at the 2006 Winter Olympics in Torino, Italy: his first Olympic games. Shockingly, he won a gold medal, after being seen as the underdog in this competition. He was then given the nickname, “Flying Tomato’” because of his red locks and his perfect flips in the air. He performed even better at Vancouver 2010, where he was certainly a crowd favorite. He took home the gold easily in his first run. White’s execution and technique in these events were labeled as “flawless”, and he was seen as untouchable, his level way above everyone else’s. What’s so great about Shaun White is his ability to maintain his speed and altitude throughout the halfpipe; usually, snowboarders lose height as they get closer to the bottom of the halfpipe, but White actually gains momentum and height, which allows him to do amazing tricks at the end of his run, such as his famous Double McTwist 1260 which truly showed how great of a snowboarder he is.

However, a true legend of a sport will never always be perfect. In the Sochi 2014 Winter Olympics, he placed top 4 overall and failed to get a medal. He suffered a couple of falls and a big crash on the side edge of the halfpipe. But, he never gave up and kept his positive attitude. White said in an interview with the Olympics in 2018, “I lost the Olympics and I was happy,” referring to his performance at Sochi. In Pyeongchang 2018, everyone was waiting if Shaun White was going to make a comeback after his short hiatus from snowboarding to pursue music. White had fierce competitors that year so many thought it was unlikely that he would get gold .His first run was good, but not good enough to be the leader. He made a small error in his second run and fell, resulting in a low score. Filled with immense pressure and intense adrenaline, White knew that he needed to land back-to-back 1440s perfectly to secure the gold medal. And he did. White’s run was fantastic, yet extremely difficult, but he still managed to complete it and win in a dramatic comeback. After the score was announced, White screamed and started getting emotional, while everyone around him cheered him on and hailed him as a legend.

Even though at this year’s Winter Olympics, White did not get a medal, his legacy and the standards that he raised for the sport of snowboarding ultimately changed the entire playing field and its community for the better. And his contributions will not be forgotten any time soon.