You are here
Home > Sports > Ultimate Redemption for Virginia 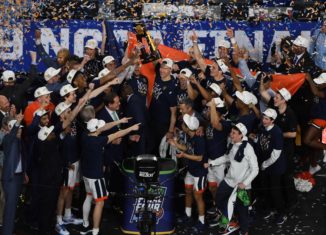 The date was March 16th, 2018. The University of Virginia basketball team was playing in the first round of the Division 1 NCAA Tournament, and they were given a 1-seed by the NCAA selection committee, a seed of which they were well deserving. The Cavaliers won the ACC regular season title after going 31-3 overall and 17-1 in the conference. Virginia faced off against the University of Maryland, Baltimore County (UMBC), a 16 seed. Going into the game, there had been 135 previous 1 versus 16 matchups in the tournament, and all of them resulted in victories for the number 1 seed. The game raised many eyebrows when it was tied at halftime, and then UMBC shockingly outscored UVA by 53-33 in the second half and eliminated the 1-seeded Cavaliers. It was instantly referred to as one of the biggest upsets in college basketball history and even sports history. UMBC went from an unknown program to the most talked about school in the country after just one game. As for Virginia, their incredible season came to an end, and the legitimacy of their program was severely questioned.

As with most things, time does make a difference, and Virginia also had a great regular season in 2019. They went 35-3 overall and had a share of the regular season ACC title, with UNC, going 16-2 in the league. Although many acknowledged UVA as the best team in the country throughout the season, there were many questions brought up before March Madness. Will they choke like last year? Is this team built for a tournament run? How will they get past what happened last year? Do they have enough offensive weapons to compete with the best of the best? All of those questions were even more intensified when they were down by 14 points to 16-seeded Gardner-Webb in the first half, but they overcame that and won by 15. They then beat Oklahoma to reach the Sweet Sixteen and then edged out Oregon in a very competitive game. They then faced off against Purdue in one of the best games in the tournament. Purdue guard Carsen Edwards scored 42 points, and it took overtime, but UVA won 80-75 and headed to Minneapolis for the Final Four. The Cavs faced 5-seeded Auburn in the semis, and the Tigers had a 2 point lead with only a few seconds remaining in the game. Then, Virginia guard Kyle Guy was fouled shooting a 3-pointer, putting him at the line with a chance to tie or take the lead with 6 tenths of a second left. He made all three at the charity stripe, and UVA was onto the Championship game, where they would meet the Texas Tech Red Raiders.

The Championship game was a defensive battle, as anticipated, and it went to overtime tied at 68. The Cavs would go on to outscore Texas Tech 17-9 in the extra session and win the National Championship. De’Andre Hunter led UVA with 27 points, and Kyle Guy and Ty Jerome had 24 and 16, respectively. Virginia accomplished a feat that was immensely impressive: coming back after losing in the worst possible way. They went from being on the wrong side of history to winning their first ever National Championship. It is a great redemption story, and many people counted them out early because of what they saw in 2018. However, head coach Tony Bennett and his group of college athletes had something to prove after last year, and they did prove that they deserved the 1-seed and got over that hump to win it all.