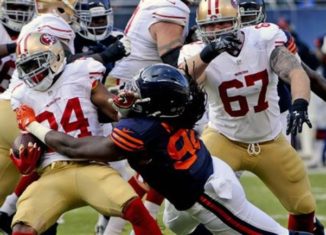 After an outstanding thirteenth week of football, we get another step closer to the NFL playoffs. Week 13 of the regular season showed changes in playoff seeding, power rankings, big games, upsets, and more. Three of the best matchups were the 49ers vs Bears, the Vikings vs Falcons, and the Eagles vs Seahawks.

After being named the starter for the quarterback position for the San Francisco 49ers, Jimmy Garoppolo (former backup to Tom Brady of the New England Patriots) led the 49ers to their second win of the season against the 3-win Chicago Bears. This game was important because it helped to decide the NFL Draft order during which these teams will choose a player who will turn their team’s future around.

The defending NFC champion Atlanta Falcons, who had 7 wins, hosted the Minnesota Vikings who have been one of the best teams this season (2nd best record in the NFC). When a great offense, like the Falcons, plays against a great defense, like the Vikings, nobody knows what to expect. In this game, however, the Vikings held the Falcons to 9 points in a 14-9 victory. This victory gave the Vikings their 8th straight win.

The final of these featured games is the Philadelphia Eagles against the Seattle Seahawks. Both of these teams are certain to make the playoffs and could possibly play each other again in the near future. Most years, there is a team that is expected to do poorly, but then rise up as one of the best teams in the NFL. Last year, it was the Dallas Cowboys. This year, it’s their division rival, the Philadelphia Eagles. Going into this game, the Eagles had the best record in the NFL. On Sunday night, they were hosted by the Seattle Seahawks. The Seahawks have been one of the best teams in the league for the last five years or so. During that five year span, they have been to two Super Bowls. In one of those Super Bowls, they dominated in 2013 with a score of 43-8 against the Broncos. The other, a heartbreaking loss on an interception thrown by their Quarterback Russell Wilson, one yard away from scoring a touchdown and winning the Super Bowl in 2015. The Seahawks shut down MVP candidate quarterback Carson Wentz as they beat the Eagles by a score of 24-10. The Eagles moved down a seed to become the 2nd best team in the NFC.

Week 13 of the NFL regular season had a big impact on the playoff picture, power rankings, and more. With only a few weeks left in this season, who knows what will happen next!