You are here
Home > STEM > Behind Flu Shots: Why Are They Failing to Cure? 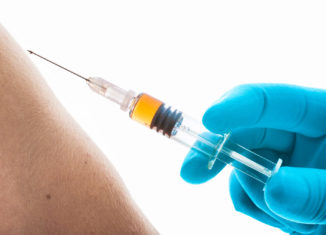 Dr. Shruti Athale, a Research Associate at Baylor Institute of Immunology Research, and her team recently conducted a study on influenza vaccines that was published in the journal Science Translational Medicine. Two different vaccines for the H1N1 flu virus (swine flu) manufactured by the same company were investigated to determine what factors into a vaccine’s effectiveness. First, it is important that a vaccine matches the strains of the circulating virus. Second, different elements of the vaccine could be blamed for overall failure in protection. The version of the vaccine that was 35% less effective failed to activate dendritic cells that are crucial to stimulating early defense responses in the immune system. These cells, which are most commonly found in the skin, lungs, and gastrointestinal lining, act as first responders to foreign pathogens with the production of interferon chemicals.

One vaccine was trivalent, protecting against three strains of viruses, while the other was monovalent, protecting against only one strain. Neither contained adjuvants, which are substances that may be added to increase a vaccine’s power. Adjuvants are typically used sparingly due to their potentially harmful side effects. It was found that the trivalent vaccine triggered three different types of dendritic cells: plasmacytoid, monocyte-derived, and blood conventional. This resulted in many different types of antiviral signaling molecules called cytokines to be released. Meanwhile, the monovalent vaccine only activated plasmacytoid dendritic cells and, hence, one type of cytokine signaling molecule. Shockingly, the monovalent vaccine even inhibited the secretion of interferon, which was needed to fight the virus.

This study confirmed the importance of targeting dendritic cells for eliciting immune responses and that vaccine manufacturers must be mindful of this. Moving forward, the responsiveness of these cells to different vaccines should be monitored. The CDC states that vaccines reduce the risk of flu illness by 50 to 60%. At the same time, they admit that these vaccines fail half the time. For the future, vaccine makers are hoping to innovate a more ideal influenza vaccine that provides long-lasting and cross-strain protection.