You are here
Home > STEM > Can Saturn’s rings and tilt be the product of an ancient, missing moon? 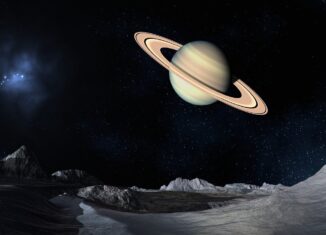 The sixth-farthest planet from the sun, Saturn is alluded to as the planet encircled by rings. Saturn is the second largest planet in the solar system, behind Jupiter. It is believed that fragments of comets, asteroids, or shattered moons make up Saturn’s rings. They are composed of countless quantities of tiny pieces of rock and ice that have been dusted with other substances. Just like a cloud, it’s impossible to walk on the rings and one would fall right through them!

The rings of Saturn are a glaring indicator that the planet is spinning at an angle as they spiral around its equator. The ringed planet rotates with respect to the plane of its orbit around the sun at a 26.7-degree inclination. Since Saturn’s tilt processes, like a spinning top, at almost the same rate as Neptune’s orbit, astronomers have long hypothesized that this tilt results from gravitational interactions with its neighbor Neptune. However, a new study brings upon new reasoning as to why Saturn is on an angle. Astronomers at MIT recognize that Neptune and Saturn may have once been in sync but also state that Saturn has now escaped Neptune’s pull. A missing moon, the astronomers hypothesize, fills the void as to what caused this planetary realignment. The team claims that Saturn, which currently has 83 moons, originally had at least one additional satellite that they have named Chrysalis. The researchers hypothesize that Chrysalis, together with its siblings, orbited Saturn for several billion years while exerting constant pressure on it to maintain the planet’s tilt, in resonance with Neptune. Chrysalis, however, is thought to have become unstable some 160 million years ago and came too near to its planet in a grazing encounter, which tore the satellite apart. The loss of the moon was sufficient to free Saturn from Neptune’s influence and give it the current tilt. Furthermore, the team hypothesizes that while the majority of Chrysalis’ body fragments may have collided with Saturn, some of them may have remained suspended in space and later disintegrated into tiny frozen pieces to form the planet’s distinctive rings. Therefore, the missing satellite could shed light on two enigmas that have persisted for a long time: Saturn’s current tilt and the age of its rings, which were formerly thought to be roughly 100 million years old — far younger than the planet itself.  These astronomers at MIT have created a groundbreaking, new theory about Saturn’s tilt and rings!