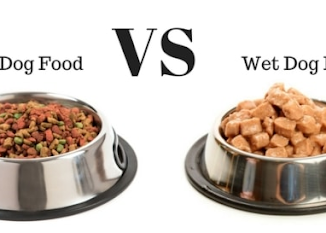 What type of food do you feed your pet? Wet or Dry? Well next time you are in the pet aisle of your local grocery store, you might want to take this into consideration. Recent studies have indicated that dry pet food may be more environmentally friendly than wet food, meaning pet owners may have an easier time deciding whether to feed their pets wet or dry food. There are an estimated 840 million cats and dogs in the globe, and as their numbers grow, the environmental impact of feeding them is becoming more scrutinized. Vivian Pedrinelli, a veterinary nutritionist at the University of São Paulo in Brazil, oversaw a study there which examined 900 pet diets. The environmental implications of each diet’s constituents were assessed, including greenhouse gas emissions, land and water usage, and chemical contamination from manure. For all parameters, wet diets had the largest environmental impact, dry diets had the least, and handmade diets were somewhere in the middle. They discovered that around 90% of the calories in wet food came from animal sources, which is roughly twice as many as there are in dry food. Many may be wondering why calories are important and why the food coming from animal sources could be environmentally costly. Calories require energy having a sustained impact on the environment. Additionally, commercial cat and dog meals aren’t usually made from the finest cuts of meat. Instead, animal byproducts, the gristle and parts people aren’t likely to eat anyway, are frequently listed in the ingredient lists. Furthermore, animal materials in pet food may not be scraps at all. If they include even a trace of human-edible meat, it could add up to have a significant impact. The scientists’ findings showed that wet food production requires more land, water, and emits more greenhouse gas than dry food production. Scientists proposed that other proteins, such as insects, could be used to make pet food more environmentally friendly. CO2 emissions from insect production can be up to ten times lower than those from traditional meat production. The researchers also stated that reducing protein and fat intake might be beneficial, as all of the diets examined supplied more of both than is recommended for dogs and cats. All of these factors should be considered when deciding the best pet food option for your furry friends.