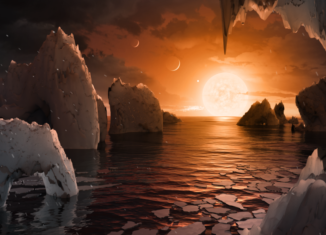 NASA has discovered a solar system about forty light years away that contains a record number of exoplanets orbiting around it. This is the first system recorded other than our own  that contains seven planets.

Last year, the Transiting Planets and Planetesimals Small Telescope, the ground-based telescope in Chile known as TRAPPIST, discovered a star system with a two exoplanets orbiting around it in the constellation Aquarius. This February, the Spitzer space telescope confirmed the existence of these two exoplanets and discovered several more in the same solar system, raising the known number of planets to seven. This solar system is now known as TRAPPIST -1.

An exoplanet is any planet outside of our solar system that orbits a star other than the Sun. Astronomers search for exoplanets around the galaxy to find planets that are part of the habitable zone, an area near a star that has conditions, similar to those on Earth, that make it possible for life to arise. In order to find the TRAPPIST – 1 exoplanets, a method of looking at transits between a planet and a star was utilized by the Spitzer Space Telescope. According to Sean Carey, “we don’t image the individual planets, what we do is the planets pass in front of the star and we see the amount of light that the star is dimmed by when a planet is blocking it.” As a planet goes in front of a star during its orbit some of the light from the star gets blocked. This temporarily lowers the brightness of the star when it is seen from Earth. This dip in brightness tells scientists that a planet exists.

Scientists have to work with a miniscule amount of information to construct a possible image for these planets. Based on the dip in the brightness of the star, the size of the star can be determined. A larger shadow created would indicate the presence of a larger planet. The order of the planets can also be determined from the changes in brightness of the star. The time it takes for a shadow on the star to appear a second time corresponds to how long it would take for that planet to go around its star. The longer it takes for a planet to go around its star, the farther away it is from that star. This is how relative distances to the TRAPPIST -1 star were determined. It was noticed that the planets are very close to each other, and all seven planets are closer to its star than Mercury is to the Sun.

Some unique properties were discovered due to the proximity of these planets to each other. Since the planets are so close to each other, “from one planet you can see the other planets” at a size comparable to the moon from Earth, according to Michael Gillon, astronomer at the University of Liege in Belgium. Their proximity also may cause gravitational interactions that would make them tidally locked, meaning only one side faces the same place so there is “a permanent day side and a permanent night side.”

The team that helped discover the exoplanets also found the approximate masses of the stars based on how they gravitationally interact with one-another. According to Mr. Carey, “they tug and pull at each other as they go orbiting around their star.” This changes how fast the planet’s orbit, and this can be recorded to measure the masses of the planets. With the masses and the volumes of the planets figured out, their density can be determined. Given the density, the team determined that the planets are most likely to be made of rock.