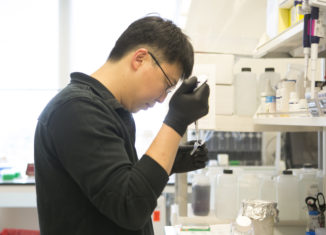 CRISPR-Cas9 is a genome editing tool that has been revolutionizing the science world. It is faster, cheaper, and more accurate than previous techniques of editing DNA and has a wide range of potential applications, including fighting many life-threatening diseases. Recently, a virus that infects major freshwater bacteria appears to be using stolen bits of immune system DNA to hijack their hosts’ immune response. This is analogous to a hacker compromising a computer system and then immediately patching it to ensure other hackers cannot break in. Microbiologists have discovered that the virus, Cyanophage N1, carries a DNA sequence- a CRISPR- that is generally used by bacteria to fight off viral infection.

“This is the first evidence we’ve seen that a virus can donate an immunity system via CRISPR,” says University of British Columbia virologist Curtis Suttle. CRISPR- or clustered regularly interspaced short palindromic repeats- are libraries of DNA typically used by bacteria to identify, and then destroy, infecting viruses. Since 2012, CRISPR has also been adopted by scientists as a revolutionary gene editing and manipulation technique. Suttle and UBC colleagues Caroline Chénard and Jennifer Wirth say the N1 virus likely uses this trick to help cyanobacteria to fight off infection by other viruses, while continuing to be a suitable host for itself. “Bacteria and their viruses have a shared evolutionary history stretching for billions of years,” says Suttle. “So at some point along the way N1 stole a defensive CRISPR array from these cyanobacteria or a close relative.” Cyanobacteria are abundant members of habitats ranging from the bottom of ice-covered polar lakes, hypertrophic coastal lagoons, to rice paddy soils and rock-pool communities. Their ancestors were responsible for producing the oxygen on Earth, and close relatives of them are still responsible for producing a huge portion of the air we breathe. Thus, a virus being able to adopt the cyanobacteria immune system means that it could possibly work in some other beneficial functions.

Scientists are hoping that they can reverse certain harmful diseases by having viruses adopt CRISPR Cas9. By manipulating the virus to only use CRISPR in a beneficial way, a person can be rid of the virus that causes the disease along with completing any gene editing that needs to be accomplished. This, however, is just speculation and has not been tested yet.