You are here
Home > STEM > Who is Greta Thunberg? 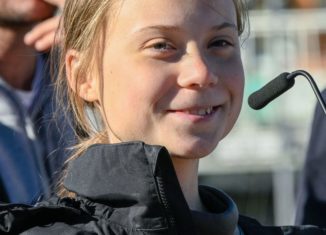 Why is a Swedish teenager making such a huge impact across the globe? Greta Thunberg is a fiery, passionate climate activist who had the courage to address the UN on the controversial topic of climate change and how it will impact the future of our world for years to come.

On September 23, 2019, Greta angrily addressed her message to global leaders at the UN Climate Action Summit in New York, stating that “she will never forgive them for failing on climate change” while holding back tears. She went on to accuse them of stealing her dreams and her childhood with empty words and promises for a healthier and more sustainable living environment. Just three days prior to her passionate speech, on September 20, approximately four million people in 161 countries participated in the largest climate change demonstration in history. The strike, led by Greta, encouraged students to walk out of schools and employees to walk out of their offices, all in a united stance to call for action to combat climate change.

Greta’s crusade began in her own country with sit-ins and strikes, holding handmade signs that read “School Climate Strike.” As the months went on, and her undeniable passion for climate change grew, this fierce young woman has turned her determination into a worldwide movement. Millions of students are now organizing their own school climate strikes using the hashtag #FridaysforFuture. Almost overnight, this young girl now has over eight million followers on her Instagram account.The young activist plans to continue her mission across the globe, but interestingly, her strong beliefs to combat climate change have become a hindrance in her travel plans. Rather than rely on air travel which dispels a large amount of carbons into the atmosphere, Greta travels from country to country on boats that use solar power and wind.

While Greta’s movement for immediate climate change is often compared to a religious awakening, she does not come without her critics. Some believe Greta Thunberg and her colleagues do not have the authority to formulate their own political movement, suggesting they are immature and referring to the movement as “global bullying.” This, however, will not stop Greta and her supporters from working towards a better, healthier future for current generations and those not even born yet.

So, what’s next for Greta? Only time will tell as this fiery 16-year-old continues her political journey to combat climate change by spreading awareness and advocating for change around the world.