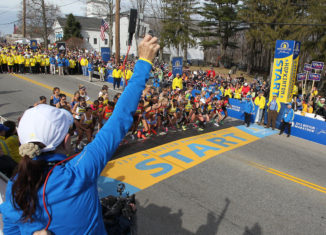 On Monday, April 21st, tens of thousands of runners participated in the 2017 Boston Marathon as friends and family cheered from the sidelines in support. Following the Boston Marathon bombings in 2013, the marathon has become a symbol of American pride and strength — even encouraging the slogan, “Boston Strong.” Four years later and the marathon is indeed still going “strong.” More than 30,000 runners came out to participate in the 26.2 mile stretch on what was most definitely a beautiful spring day. Spectators from all over the country and students from local colleges, such as Boston College, BBoston Marathon

oston University, Harvard University, and more, joined friends and families of racers in waves to support their fellow Bostonians.

For BC students, this is an extra special occasion given that mile 21 runs straight through their campus. With a day off from classes, the students all gather and cheer on the runners right from their collegiate home. The real milestone of the whole marathon is the climb to the top of “Heartbreak Hill” in Newton — home to BC. According to the Boston Patch, “Kenyan Geoffrey Kirui pulled away late from American Galen Rupp to win the men’s elite race early Monday afternoon, finishing in 2 hours, 9 minutes and 37 seconds. [Kenyan] Edna Kiplagat won the women’s elite race in. Kiplagat finished in an unofficial time of 2:21:53. Both were running Boston for the first time.” Kiplagat has made a name for herself over the years as an elite marathon runner, winning and placing highly in marathons across the world including New York City, Chicago, London, and Tokyo.

However, one of the most interesting stories from the marathons stems from runner Kathrine Switzer. In 1967, as a 20-year-old Syracuse University journalism student, Switzer became the first woman to ever run the Boston Marathon. According to CNN, “50 years later, Kathrine Switzer crossed the finish line of the Boston Marathon wearing the same bib number an official tried to rip off her clothing in the 1967 race. This was Switzer’s 50th marathon and ninth time running the Boston race.” Overcoming adversity after the 2013 bombing demonstrates the perseverance of the city of Boston.