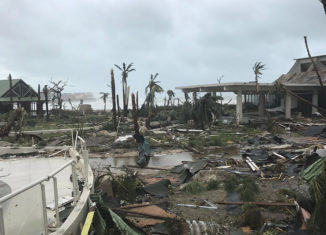 In 2017, natural disasters, particularly hurricanes, have taken a major toll on the Western hemisphere. Hurricane Irma, which hit the northeastern Caribbean  and Florida Keys, was extremely destructive. Less than one week later, hurricane Maria added greatly to the damage, especially in Puerto Rico. These natural disasters have devastated countless people’s homes and lives, in some cases leaving them with nothing and having to mourn the loss of loved ones. Parts of Puerto Rico are still without power, leaving their citizens hopeless. As the winter breaks in both December and February rapidly approach, these devastated destinations are going to see even more suffering. A lot of these islands typically depend on the tourism industry, but as a result of current, seemingly irreparable, devastation, there are several places that are just not safe to visit. Many vacations have been cancelled because of the destruction left behind by these hurricanes which will most definitely result in further struggle for the inhabitants of these places.

Hurricane Irma has caused a vast majority of hotels in islands such as Anguilla and the very popular destination of St. Martin to be closed down for the holiday season.. The CEO of Starwood Capital Group, when questioned about one of Anguilla’s hottest resorts, Four Seasons and Residences Anguilla, said “The property was ripped apart and it looks like a nuclear bomb went off. Over $20 million in damage.”  Alison Greggor, a writer for Newsday, states that 99 percent of the building stock in Barbuda, between hotels and housing for residents has been destroyed.  In St. Martin, Sonesta hotels has declared all three of its resorts to be closed throughout the December 2017 holiday season, with hope to get it habitable by February break. Turks and Caicos was lucky to have not been impacted as harshly as some of the other islands, but they were not without their own struggles. Some resorts lost power and access to clean water, such as Beaches, Ocean Club Resorts, and La Vista Azul; however, these hotels were fortunate to be up and running again shortly after the storm. On the other hand, St. Thomas was brutally hit by the natural disasters. The Windward Passage has been declared closed for 6 months, along with many other resorts. The devastation did not stop there.

On September 20th, hurricane Maria hit Puerto Rico leaving over 48 people dead and thousands without homes, power, or clean water. Even before the hurricane hit, Puerto Rico was suffering from economic problems. They are in $70 billion worth of debt; after hurricane Maria, the country fell into a complete crisis. Many hotels also had to cancel their reservations through December of 2018 which contributes to the rapidly rising debt as Puerto Rico relies greatly on tourism.

If you would like to help rebuild these islands and help the many people suffering, you can get involved. There are many hurricane relief programs that allow you to donate to the areas directly affected by the recent hurricanes. The American Red Cross is working very hard to get food, shelter, and emergency support to those in need; however, they need help to do so. By simply going onto their website (www.redcross.org), you can donate as much or as little money as you would like, and all proceeds go directly to the relief effort. Other organizations, such as UNICEF USA, have set up similar relief programs. UNICEF USA is working to deliver 12,000 hygiene kits and over 1,000 pallets of drinking water to families in affected areas. Additionally, GoFundMe is allowing donations which will support specific individuals or charities, such as St. Maarten Hurricane Relief and the Anguilla Hurricane Relief Fund.