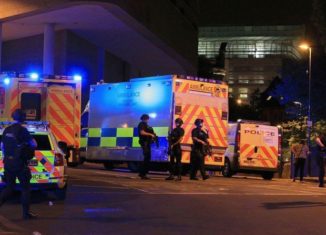 On May 22, a devastating attack followed the conclusion of an Ariana Grande concert at the Manchester Arena in Manchester in the United Kingdom. Twenty-two innocent fans and concert-goers were killed and numerous others were critically injured. The suspected attacker who died at the scene has been identified as 22-year-old Salman Abedi. ISIS has claimed responsibility for the horrific incident, although the police do not have any direct evidence to link the Islamic State with the attack. According to CNN, ISIS stated that a “soldier of the caliphate” planted the explosive bombs within Manchester Arena.

Minutes after the singer performed her last song, a bright flash was seen and an extremely loud bang was heard at around 10:30 p.m. Scared children and their parents fled the arena in the midst of chaos and panic. Although this attack was extremely horrifying and unexpected, police have previously asserted that an attack was to be expected within the country. In March, a man drove his car into a crowd of bystanders on the Westminster Bridge and stabbed a policeman. Authorities are concerned that a more complex network of terrorists than what is already known may be present within England .

A few hours after the attack, Grande Tweeted, “broken. from the bottom of my heart, I am so so sorry. I don’t have words.” Ariana Grande’s “Dangerous Woman” tour was originally scheduled to go through mid-June, but the singer has suspended the rest of the tour in light of recent events. Heroically, around 400 additional police officers were brought in immediately after the attack, and security around London was drastically increased. Scooter Braun, Grande’s manager, posted a message on Instagram stating, “We are thankful for the selfless service tonight of Manchester’s first responders who rushed towards danger to help save lives.”  The following day, many people mourned the victims of the attack by bringing posters, flowers, and balloons to St. Ann’s Square in Manchester.

Concerts are supposed to be some of the best and most memorable moments of young children’s lives. In the future, it would not be surprising if people grew afraid to attend concerts since they can be considered easy targets for attackers. Although we cannot live in fear, it is likely that concert-goers will begin to feel increasingly hesitant about attending events like these for fear of terrorism. Unfortunately, the selfish and terrifying actions of one individual ended the lives of 22 innocent victims, injured countless others, and took away the family members of too many helpless people.